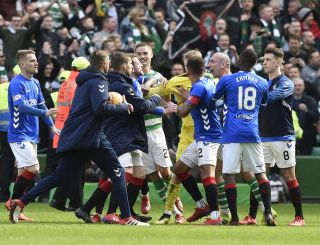 Both clubs have also been cited relating to the confrontation immediately after Celtic’s 2-1 victory, which extended their lead at the top of the Ladbrokes Premiership to 13 points.

Brown – who raised his arms in triumph in the direction of the Rangers fans immediately after the final whistle – has been accused of breaching a rule which states players, coaches and officials should “act in the best interests of association football”.

Gerrard has been accused of misconduct and offered a fixed one-match touchline ban. The former Liverpool captain is understood to have been charged over post-match comments made to referee Bobby Madden. He has until Friday to accept or challenge his punishment.

Madden sent off Alfredo Morelos for elbowing Brown during the game and gave Andy Halliday a post-match second yellow card for remonstrating with the Celtic skipper over his celebrations.

Both clubs have been hit with a charge over confrontations involving three or more players, which carries a punishment of a fine. Inverness and Ross County both recently received £2,500 fines over a Highland derby confrontation.

Brown was also struck by Ryan Kent during the game, with the Rangers winger challenging a two-match ban.

The Celtic captain and both clubs have until Wednesday to respond to their charges with hearings pencilled in for May 2 for all four cases.

Hearts and Aberdeen have also received notices of complaint from the SFA relating to the same rule 204 which the Glasgow clubs have been accused of breaching.

Each club had two players booked after Dominic Ball’s foul on Hearts wing-back Jake Mulraney sparked angry scenes during the hosts’ 2-1 win at Tynecastle on Saturday. Their cases will be heard on April 25.