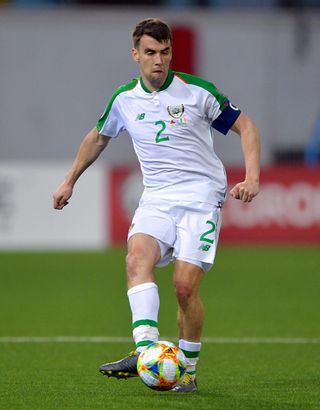 Seamus Coleman is hoping minnows Gibraltar can cause some damage after giving the Republic of Ireland a scare in their opening Euro 2020 qualifier.

Jeff Hendrick’s 49th-minute strike was all that separated the teams on the artificial pitch at the Victory Stadium on Saturday as Ireland secured a hard-fought away victory.

The Republic beat Gibraltar 7-0 in Dublin and 4-0 in Faro in their only other previous meetings during the Euro 2016 qualifying campaign, and Coleman saw enough improvement to believe they could take points from the other teams in Group D.

The 30-year-old Ireland skipper said: “I hope so, I hope so. The players afterwards were happy with how they’d performed. They’re giving it their all too and thankfully we got the win.

“But I would love to see them take points from teams and hopefully they can do.”

If Gibraltar have improved significantly since the sides last met, Ireland were far from their best in admittedly difficult conditions in Mick McCarthy’s first game back as manager.

He later described the encounter as a “horrible” game and while Coleman did not disagree, he admitted that international football is getting more challenging every season with Tuesday night’s opponents Georgia another case in point.

“Georgia is going to be a sticky game home and away as well. It’s a tough group and we’ll just take one game at a time, that old cliche.

“We’re not taking Georgia for granted – they are a good side and they’re getting better with every campaign as well.”

That McCarthy’s men returned home with the points was due in part to a vital save from keeper Darren Randolph as Roy Chipolina threatened to head the home side into the lead seconds after half-time.

Coleman said: “It was tough, but it was the same for both teams and we got over the line.

“We definitely would have liked to be more comfortable, I’m not going to try to butter it up any different, but (we got) three points. We look forward to Georgia now and hopefully we can get three points again.”

The Republic have never lost to Georgia in nine previous meetings, but could only draw 1-1 in Tbilisi in the last encounter, a World Cup qualifier in September 2017.

A rare Coleman goal secured a 1-0 home victory 11 months earlier and the full-back would happily settle for a repeat after reaching the 50-cap mark in Gibraltar.

He said with a smile: “I scuffed it over the line, but I’ll take any goal I can get at this level.

“Fifty caps for your country is a massive achievement and I’ll look forward to hopefully my 51st if the manager picks me against Georgia.”