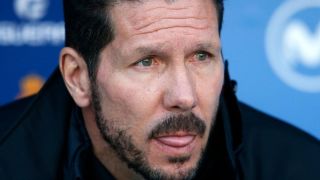 Diego Simeone praised goalscorers Antoine Griezmann and Fernando Torres after Atletico Madrid came from behind to beat Espanyol 3-1 in La Liga on Saturday.

Simeone's side maintained pressure on La Liga leaders Barcelona - who they face in the second leg of their Champions League quarter-final on Wednesday - after Torres cancelled out Pape Diop's opener at Cornella-El Prat.

Griezmann put Atletico into the lead before Koke, who supplied the other two goals, headed in a Torres cross in the last few minutes to add gloss to the scoreline.

Simeone said he was "very happy" with the way his team fought back after falling a goal behind.

"The team responded again very well, especially after the Espanyol goal," Simeone told the media after the game. "I am very happy with the work of the players.

"We persevered in pursuit of victory. The second half was very complete. We were strong and [that is what] this game is all about. An important victory of this magnitude generates enthusiasm.

"Torres is persistent, he deserves everything that is happening. [Griezmann] is fantastic and I like him very much."

Simeone insisted his team can still win La Liga after climbing back above Real Madrid into second place and closing the gap on Barcelona to just three points ahead of the league leaders' match at Real Sociedad later on Saturday.

"I was taught that [you] must insist and believe in what you do," Simeone said.

"Things fall on their own if they have to fall. We are giving all we have. We are intense, persistent, and continue fighting."