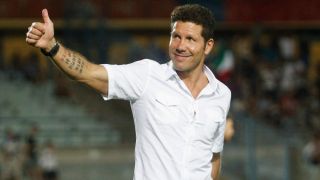 The 2014 Spanish champions have enjoyed a strong window to date, with Nicolas Gaitan, Kevin Gameiro and Sime Vrsaljko arriving, while star names including Antoine Griezmann and Jose Maria Gimenez have committed their futures to the Vicente Calderon.

Reports in Spain on Saturday have claimed that Simeone is targeting Sevilla winger Vitolo in a €25million deal, with Oliver Torres expected to join Porto for €15m to make room for the 26-year-old.

And Simeone says he is keeping his options open in the final 11 days of the transfer market.

"Things look good, we've worked well, although the group has been split up with players arriving," he said, speaking ahead of Sunday's LaLiga opener against Alaves. "There's a lot of excitement and enthusiasm.

"There are a few days to go until the market closes, and until the end, we're open to exits or signings.

"We needed Gaitan, he has huge quality. He's a player who will have important minutes.

"Vrsaljko has come to improve and compete with Juanfran. Gameiro has speed, he's strong and we'll have to take advantage of that.

"We want to improve the numbers on last year and to continue getting better. It won't be easy because there are major competitors, but we feel strong.

"It will be difficult to decide this year. We have a very balanced squad. I'll have to be as lucid as possible."

Simeone believes last season's LaLiga2 champions Alaves will offer a stern test for his side, but he is confident they now boast a number of options to change their tactical approach in more difficult matches.

"Alaves have quite a new squad, with attacking wingers, a very good press and a defensive grouping," he said.

"We have players ready to change, we have options to play in different ways. I don't think we'll change much but we have the options to bring variety. We always have the same style - to go forward."

Earlier on Saturday, Atletico announced the signing of goalkeeper Axel Werner from Boca Juniors, where he will spend the campaign on loan.

"The transfer of the young Argentine goalkeeper was completed early this morning and he has signed a five-year contract," Atleti said in a statement.

"At the same time, Atletico Madrid and Boca Juniors have sealed an agreement for the goalkeeper to join the Xeneize on loan for this season."