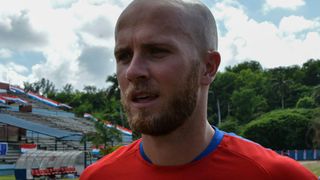 The teams face off in Columbus, Ohio – a crucial swing state that Trump won in his victory over favourite Hilary Clinton in Tuesday's poll.

The controversial Republican president-elect provoked outcry during a bitter and divisive campaign, with Mexico and Mexican immigrants the focus of much of his ire.

Trump's flagship anti-immigration policy is to build a wall covering the USA's 2,000-mile border with Mexico, while in the speech to announce his candidacy last year accused the Hispanic country of "not sending their best people" to the States and alleged "they are bringing drugs and bringing crime and their rapists".

The 70-year-old's win this week was very poorly received in Mexico and Bradley believes the latest instalment of the USA's CONCACAF rivalry with their neighbours cannot exist in a vacuum.

"There is an added layer to this game in terms of everything that's gone on in the last few months," he told reporters.

"We, as Americans, have total respect for everybody and a real appreciation for not just the Mexican Americans but the people from around the world who come and make a new life for themselves in our country.

"We respect our system, we respect our democracy and I think, as we have always done, people will find a way in this next stretch to come together to get behind our new president.

"We have no choice but to have total faith in our system and the new president, that he's going to make the best decisions for everybody in this country."

Friday's game marks the start of the fifth round or "Hexagonal" stage of CONCACAF qualifying, with the USA and Mexico among six teams contesting three automatic qualifying spots for Russia 2018 in a round robin.