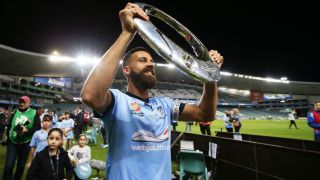 Sydney FC have begun the celebrations after their dramatic A-League Grand Final win over Melbourne Victory.

Sydney were hot favourites having topped the regular-season table by 17 points, but were pushed all the way in a tense and fiercely competitive final, with 11 bookings handed out.

And they celebrated their first championship since 2010 in emphatic style after the spot-kick drama.