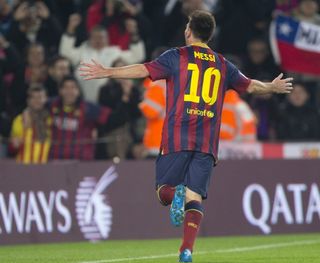 Can Betis build on win against Bilbao?

In a sort of turning a weakness into a strength type thing, the midweek cup clash for Betis against Athletic could have been a bad night for the Seville side with another sorry, hopeless defeat. Instead, bottom-of-the-table Betis surprised everyone, especially themselves, by dragging out a fortuitous 1-0 victory against the Basque visitors to lift a few heads for the weekend clash against Osasuna, a very winnable game indeed.

Will Aguirre make himself heard from the stands against Madrid?

Four matches! That was the punishment handed down to Espanyol boss Javier Aguirre, who had years of referee-baiting in Spain dealt in one go with an immense suspension for insulting the referee during last weekend’s defeat at Osasuna. “It was a yellow card, you son of a b****” was the comment made by Aguirre to the man-in-the-middle.

“I’ve been a professional for 38 years. I am who I am,” explained the Popeye-channeling, Mexican swear-master before the decision was made, on why he is never going to change his ways. That ban will be in full force on Sunday during the visit of Real Madrid to Cornella, in a game where Aguirre is going to have make in-match suggestions to the refereeing team through a megaphone, from the stands.

Is life about to get even worse for Rayo Vallecano?

Monday’s 5-2 home defeat to Villarreal saw Rayo’s leaky tally of goals conceded reach 45 strikes, the worst since Castellón back in the 1981/82 season at the same stage. The match continued Rayo’s tendency of dominating possession in games but doing next to nothing with the ball, aside from picking it out of the team’s own net. “What’s the point in having 70% possession if every time they score against us!” complained an exasperated Paco Jémez, whose players are making a short trip to Getafe this weekend.

Life didn’t get too much better on Thursday with Rayo only managing a goalless draw against Levante in the cup to produce a rant from the Rayo boss that he was tired of the same players making the same mistakes. “The only solution is to bring up a kid from the youth team who will do what he has to do,” huffed a hacked off Jémez.

Can Valencia keep up momentum under Pizzi?

Footballing matters are already looking a little better in Mestalla under Juan Antonio Pizzi. The new Valencia boss pulled out a win against Levante in La Liga last weekend and gave Atlético Madrid a good showing in the cup, although it was Helder Postiga who was needed to dig out a last-gasp draw. And that’s never a good thing.

While life has improved on the field, the Valencia players have continued to put the boot into the old boss. Ricardo Costa had been a little critical of the leadership qualities of Miroslav Djukic, and his defensive partner Jerome Mathieu has followed suit by claiming that the Serbian “didn’t have any clear ideas. He didn’t lead the players and this really messed things up.” “Pizzi speaks to the footballers, face to face,” revealed the French stopper, approvingly.

Will Granada ever win at home again?

The latest club about to be in crisis according to LLL’s panic-meter is Granada, a team which has now lost its four last league games from five. In theory, a home game against lowly Valladolid should be a fine time to bounce back, if it were not for the irksome fact that Granada has lost seven from nine league games in their own stadium this season.

Can Real Sociedad put away another Champions League rival?

Last weekend’s monstrously good victory against Athletic Bilbao moved La Real to just one point from fourth behind their Basque rivals, and this weekend the side from San Sebastian have another chance to cement a place in Europe next year. On Monday, Real Sociedad are travelling to the east coast to take on sixth-placed Villarreal, a team that the northerners have not faced for a good day or two with both clubs playing out a goalless draw on Thursday night in the Copa del Rey.

Will Benzema break his century against Espanyol?

There may well be a temptation in Karim Benzema’s strangely-bearded head to refrain from scoring in Sunday’s clash against Espanyol and the following game at Betis, especially as bad misses from five yards can normally be attributed to business as usual for the Frenchman.

Benzema’s goal in the 2-0 win against Osasuna in the Copa del Rey make it 99 competative goals for the striker for Real Madrid since joining the club back in the day in 2009. The reason for the reluctance will be Benzema’s desire to get a huge round of applause from the Bernabeu crowd in a fortnight’s time against Granada, something that the Frenchman rarely gets to experience. Normally, indifference or outright boos greet the footballer who will forever be seen by home fans as a bit of a fey, let-them-eat-cake aristocrat who is incapable of a putting in a Harry Redknapp style shift.

What will happen to the Calderón if Atlético win?

Atlético fans have had some time now to change their traditional mindset that only bad things happen to the club and this is quite fun on the whole. Winning the Europa League and beating Real Madrid in the Copa del Rey final in the Santiago Bernabéu tends to put a different perspective on footballing matters. However, LLL is not entirely sure what will happen to the collective hive mind if the Rojiblancos beat Barca on Saturday night.

For the whole season, the club has been plucky pursuers giving the normal Big Two a run for their enormous sum of money. The mantra from the players and Simeone has been to portray Atleti as the underdogs just doing their best to hang on to Barcelona’s coat tails. A victory would put the Rojiblancos into a three-point lead and a nudge ahead in the head-to-head stakes. This could either see the Calderón crowd growing in confidence along with Simeone’s side or taking a collective gulp and fearing what perils might be around the corner from such a promising position.

Can Courtois show he’s the man for the Camp Nou?

While Marc-Andre Ter Stegen seems to be the next man between the sticks once Víctor Valdés has left the Camp Nou, the name of Thibaut Courtois is constantly being bandied about as a possibility, even though José Mourinho seems to be quite fixed on the idea that the goalkeeper will not be sold to a direct rival of Chelsea. Which is quite sensible, really.

The Belgian was typically solid in the two matches between the sides in the Spanish Super Cup back in the summer and was given the chance to show his stuff again in a midweek cup game against Valencia. A clean sheet against Barcelona could be another step in the Catalan club making Courtois their number one, although the keeper showed little enthusiasm in watching Saturday’s opponents in his spare time. “I was on the Playstation,” admitted the waffle-fancying Belgian to Radio Marca when asked if Wednesday’s cup clash with Getafe was on his TV.

Will little Leo be let loose against Atlético?

Some mazy runs and a couple of late goals weren’t the most noticeable aspects of Leo Messi’s return to action on Tuesday after two months out. Instead, it was the big cheesy grin that appeared on the player’s face when he realised that everything was working as it should have been in terms of his legs.

For the much of the first part of the season that the Argentinean has been involved in at Barca, scowling has been all the rage in Messi’s world. Now Tata Martino needs to make the decision on whether or not the newly-recovered rampager should be let loose in the Vicente Calderón.

It's all too easy sticking a few goals past the ever-obliging Getafe in the cup, but facing the granite-tipped studs and elbows of Atlético Madrid on Saturday is a completely different saucepan of salmon. Alex Song certainly thinks he should be with the excitable tweet that “the monster has returned!”