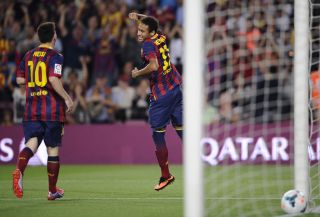 1. Will Tata deploy his dynamic duo against Madrid?

Barcelona (1st) vs Real Madrid (3rd): 18.00 CET
It is in the attention-sucking Clásico fixtures that Spain’s big two really get to display their wares and show off their expensively-purchased trinkets. In theory, Saturday’s big ‘un is the perfect time for Barça to deploy the mega-pair of Leo Messi and Neymar up front together, and really give an indication of the partnership’s powerful potential. However, that could well be something of a gamble in a fixture in which Barcelona have struggled of late, and could need a bit of beef in the box in the form of Cesc Fabregas.

Barcelona have now gone five Clásicos without a victory, so Saturday’s game is a fine time for the club’s Argentinean manager to show if has any new tricks up his sleeve for his new employers.

Say what you will about José Mourinho, the Chelsea boss certainly knew how to handle Barcelona in the final months of his action-packed spell at Real Madrid. After a disastrous start against the Catalan club and repeated attempts to beat the opposition up, Madrid became a bogey team for Barça, with the capital city side avoiding defeat in the past five Clásico clashes. A huge amount of this success is of course owed to Cristiano Ronaldo, who has scored eight goals in the Camp Nou - twice as many as his nabbed at Santiago Bernabeu. While there is much talk of what will be done with Gareth Bale during Saturday’s game, the key, as ever, will be getting the best out of the club’s Portuguese über-performer.

3. Will it be another rocky ride for Valencia?

Villarreal (4th) vs Valencia (8th): Sunday 17.00
It’s been a bit of a mad season for Valencia so far, with peaks and troughs a’plenty. Last week’s home defeat by Real Sociedad was certainly a low point and would have put the team into a grump ahead of the trip to Villarreal in a local derby. But then wide-eyed, plucky St. Gallen came along in the Europa League and were on the wrong end of a 5-1 drubbing. However, a significantly tougher test awaits on Sunday against a high-energy, fast-paced Villarreal, who will have spent the week pondering a flat performance in Monday’s defeat at Athletic Bilbao while embarking on those daily 128-mile runs Marcelino the Manager is so fond of.

4. Will Sociedad move on from Old Trafford?

Real Sociedad (12th) vs Almería (20th): Sunday 19.00
A bit of psychological wizardry is going to be needed by La Real boss, Jagoba Arrasate. The manager of the Basque side is going to have to wipe out the memory of the midweek misery in Manchester, where he said that his team “deserved the defeat as we didn’t play our best game,” and put the footballers in the mindset of the side that beat Valencia in Mestalla last weekend. In theory, the match could not be any easier against Almería; demoralised opposition without a win this season, and led by a young inexperienced boss.

5. Can Getafe remain the most in-form side?

Getafe (5th) vs Athletic Bilbao (2nd): Monday 22.00
La Liga Loca feels a little harsh in making this accusation, but it would be a very 'Getafe' thing to lose spectacularly at home in front of a crowd that could reach five figures, no less. The Coliseum club's run of four straight wins has plonked them in fifth, a whole five places higher than the natural spot of the club. Monday’s opposition in a game that will finish close to midnight is Athletic Bilbao, a team one place below the Madrid side. This means, should Villarreal fail to beat Valencia at home the day before, one of these two could be in the Champions League places at the end of the round.

6. Will there be any Rayo fans in the stands?

Rayo Vallecano (14th) vs Valladolid (17th): Friday 21.00
The more Rayo’s wonderfully boisterous supporters protest dumb kick-off times on Friday or Monday night (Rayo would ideally like midday on Sunday), the more the Powers That Be decide to plonk them in these graveyards spots. Funny that...

The non-fan-friendly kick-off time, combined with the non-sexy opposition of Valladolid, sees the club allowing any member to buy another ticket anywhere in the stadium for €9.95. The lowest price for someone to pop out of the pizza place next to the stadium and into the match to see if Rayo can win three from three is €18.

7. Can Celta Vigo pick themselves up?

Málaga (13th) vs Celta Vigo (19th):Saturday16.00
A potentially thrilling campaign just gets worse and worse for Luis Enrique’s side. As Galicia moves into more autumnal fare, which can be a damp, squishy time, Celta Vigo are on an awful run of four straight defeats. The most recent slumped into town on Monday night with a late loss to Levante. The good news for those who like their teams to stand by their men, though, is that the former Barça ‘B’ boss is still in the mood to carry on, cheering that he “still sees the glass half full.”

Club president Carlos Mouriño promised his confidence in the coach was "total, the same as the beginning of the season.” The problem there is that Paco Herrera, the manager who began the last campaign with the million percent support of his boss, was fired halfway through the year.

8. Will Elche get their own back on Granada?

Elche (10th) vs Granada (16th): Saturday 20.00
Two and a bit years ago, these two teams met in the second division play-off final, and it was a bit of a fiery affair with Granada eventually coming out winners. Because there was a little bit of bother among the fans, the fan clubs have come to together and called for everyone to get along.

‘Tis an intriguing clash to come, with Elche confounding LLL’s predictions by holding their own in ninth after three straight wins and Granada failing to challenge for Europe by hovering above the drop zone.

9. Who will be last man standing at Levante?

Levante (9th) vs Espanyol (7th): Saturday 22.00
Ooh, this is going to be nasty. One defensive, bustling, hard-working, uncompromising team against... pretty much a carbon copy. Espanyol, under the ultra-competitive Javier Aguirre, are coming off the back of a pleasing shut-out of Atlético Madrid, while Levante continue to be the most brutally effective team in La Primera. Valencia’s second side - and often superior it feels in recent seasons - tend to strike rarely but strike hard with a fondness for goalless draws and narrow wins. Indeed, an extreme effectiveness sees Levante in ninth spot, with just nine goals, two less than Almería at the bottom of the table. “Any moment can make the difference and win the game,” roared goalkeeper, Keylor Navas, on a never say die attitude for Levante.

Atlético Madrid (2nd) vs Betis (15th): Sunday 21.00
Noooo! One of LLL’s favourite teams (thanks to their unpredictable brilliance) is going through a rough spot. Last week’s home defeat to Elche was a painful one, and opened up a divisive can of worms in the Betis camp. After the loss, manager Pepe Mel said that there wasn’t too much to be concerned about as “we have enough in the tank for a quiet year in La Primera.” The response from Betis president, Miguel Guillén, was to warn that “if we throw in the towel on the sporting front then it will go badly for us.”