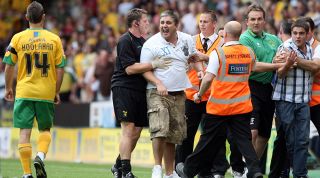 The Zimbabwean grabbed Macca by the throat, gave him a piece of his mind and shoved him in the face. McManaman gave the eccentric stopper a bit back before walking away from the enraged net-minder. Very wise, too.

2. Gunning for a point

“It wasn’t the first time I’d seen that happen,” claimed Brazilian maverick Caju after an explosive end to a Botafogo-Flamengo clash in 1970.

When O Fogao grabbed a late equaliser, an irate Fla fan ran onto the pitch armed with a loaded pistol and proceeded to pump its contents into the match ball. “He was a nutter,” trilled Caju. “He needs a new brain.”

Gareth Bale was understandably thrilled to have scored for Real Madrid against Levante in March 2015, ending a relatively barren run of 10 goalless games for the Welshman.

But not everyone was so chuffed with the wideman. Nope: rather than celebrate with Bale, Cristiano Ronaldo threw his arms up in disgruntlement after ball hit net, having scuffed his bicycle attempt moments earlier.

"It's difficult to be Cristiano and he has been performing at a very high level for a number of years," team-mate Sergio Ramos reasoned post-match. "He knows himself better than anyone, he has a very competitive character and we aren't worried if he didn't score if Bale subsequently did."

The clown prince of keepers during the early 20th century, Stoke stopper Leigh Richmond Roose thought nothing of sitting on top of his crossbar during breaks in play, or chatting to members of the crowd.

He also had the shortest of fuses, and in 1905 sought out a barracker who’d criticised him for conceding a late goal against Everton. Roose booted him straight in the plums at a swanky post-match reception.

When hapless Belgian lower-league outfit Wijtschate conceded their 16th (and final) goal against Vladslo in 2002, referee Marc Gevaert did the humane thing – and blew up 10 minutes early.

“I didn’t want to start sending off any of their players, but they were starting to get frustrated and upset,” explained the kindly man in black.

“We didn’t want the referee taking any pity on us,” huffed a Wijtschate spokesman, his side having shipped 132 times in just 15 games. There’s no pleasing some people.

With his side entrenched in the relegation mire in March 2012 and just a handful of Bundesliga games remaining, Hamburg coach Thorsten Fink employed a unique approach to stop Die Rothosen leaking set-piece goals: fining them €500 per dead-ball strike conceded.

“I was like a father,” he harrumphed. “Footballers are like children. But I let them take some money back out of the pot once we’d stayed up.”

Leeds United’s Willis Edwards, a £1,500 signing from Chesterfield in 1925, was renowned for his borderline psychotic will to win. But he went too far in the 1926 close-season when, in a practice match, he repeatedly booted his own goalpost after the Yorkshiremen conceded a late goal.

Edwards broke three toes and nearly missed the start of the upcoming season.

When Colchester United went 4-0 up at Carrow Road after just 22 minutes of their August 2009 League One match against Norwich, one furious Canary flipped, running like a lunatic towards manager Bryan Gunn and ripping up his £350 season ticket. This was the opening day of the season .

Seven days later, Gunn was gone and Norwich soon recovered from that 7-1 shellacking to win the league with 95 points under Paul Lambert – who as Colchester boss had delivered the Norfolk side that early-season lesson.

Delighted with a routine 3-1 victory over QPR in December 1986, Arsenal fans barely even noticed the visitors’ late consolation. Raging manager George Graham certainly did, though, and duly locked defensive stalwarts Kenny Sansom, Viv Anderson, Tony Adams and David O’Leary in the dressing room for more than an hour to deliver the mother of all bollockings.

“George questioned whether we wanted to play at Arsenal,” Sansom later revealed. They’d not conceded in the previous five games.

Newell’s Old Boys defender Andres Rebottaro was a renowned firebrand defender, repeatedly berating his back four for their sloppiness.

But Rebottaro took things a step further in a 1972 league game against River Plate by simply walking out of the stadium at half-time after his side conceded just before the break. “I admire his passion, but one has to stay and fight,” huffed coach Juan Urriolabeitia.

This feature originally appeared in the March 2015 issue of FourFourTwo. Subscribe!