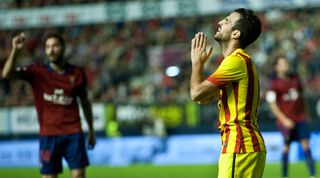 A bad Saturday for Barcelona and Atlético Madrid but a good ‘un for those with a financial stake in La Liga remaining an active contest going into November. That scenario was in big danger before the weekend, with the possibility of a Barça Clásico win next weekend parking Real Madrid eight points behind the Catalans - a virtually insurmountable gap for a team still finding its way under a new regime.

Although a defeat in the Camp Nou is still a distinct possibility for Madrid, a six-point deficit is still small enough for die-hard La Liga fans and passers-by to maintain interest.

2) Another remarkable record blown by Barça

It wasn’t just the record-equalling consecutive win that slipped from Barça’s grasp on Saturday in Osasuna, but the end of a run that saw the Catalan club scoring in each of the past 63 league games - a stretch that began against Villarreal in January 2012.

Saturday’s shutdown for Barça was not that unusual - heck, even LLL hinted at it in Friday’s preview. It was just one of those matches when not enough chances were created and the finishing wasn’t quite up to scratch, especially from Cesc Fabregas. “The Barça of Pamplona gave little reason to kick off a midweek crisis,” wrote Santi Nolla in Mundo Deportivo, echoing Tata Martino’s view that “I didn’t see any step back in the team, we drew as it had to be that way.”

LLL is channeling a bit of Flavor Flav with this one, and admittedly the logic is a little skewed. The reaction in the Madridista press to the 2-0 win over Málaga was a mixture of relief and pride for the simple fact that Carlo Ancelotti’s side weren’t unrelentingly awful. “The best part is that the team is not just playing well, but very well,” wrote AS editor, Alfredo Relaño.

But hark at the stats. Real Madrid had 22 shots on target - Willy Caballero was outstanding in the Málaga goal - but the home side had to rely on a drifting Angel di María free-kick that accidentally went in, and a soft penalty after Gareth Bale lost his balance in the box. Madrid were not far from headlines concerning all talk and no trousers during the match.

Chuck D and the gang would have a lot to say about Madrid going into the Juventus and Clásico clashes. Aside from asking what time it is, repeatedly.

A defeat at Espanyol for Atlético Madrid should not take anything away from a truly remarkable run of eight league wins in a row since the beginning of the season for the Rojiblancos.

Like Barcelona, Diego Simeone's side were just a single victory away from equalling the all-time record. On Saturday, however, Atlético ran into a stubborn Espanyol side that had lost their previous three games. It was only a glitch from the normally impeccable Thibaut Courtois, who failed to cut out a cross that then slipped past him, that stopped Atlético picking up at least a point and remaining tied at the top of the table.

Until Saturday’s victory in Mestalla, La Real’s only win of the season was in the opening round when hopes were still high of the Champions League campaign to come. Two defeats in Europe and failure to pick up another victory in La Primera saw rather glum Basque faces in San Sebastian.

But everything looks a little perkier now after a 2-1 win against Valencia, just in time for a trip to Old Trafford to take on a potentially vulnerable Manchester United on Wednesday. There was definitely a bit of a swagger back in Real Sociedad’s step.

6) Valencia still being made to suffer

Aside from the usual outbursts from unhappy players, Miroslav Djukic must be cherishing those quiet moments found in international breaks. After all, no matches can be played by Valencia, and therefore no home defeats can occur to bring about the wrath of Mestalla.

Not even a re-painted and spruced up stadium could cheer up home supporters, who saw their side's recent La Liga revival ended with defeat at the hands of Sociedad, the accursed side that snatched fourth spot from Valencia on the final day of the season. “It was a step back,” admitted Serb, Djukic.

7) Getafe are the new Barcelona

Four consecutive wins for the remarkable Getafe, added to at Granada, see the Coliseum club on the fringes of the Champions League places. A large chunk of this success is owed to Pedro Léon rediscovering his previously vanished mojo, with the midfielder having scoring three in two games. “Winning five of our past six matches is a tremendous run,” beamed Luis García, whose team may be able to go on their 43-point shutdown earlier than ever this season.

‘Tis a tough business running a small football club that punches above its weight. Almería are doing well just to be in La Primera, but a bad start that sees the club without a win in the current campaign had the supporters gathered and singing the familiar protest songs about mercenary players after Sunday's defeat to Rayo Vallecano. “This was our worst game at our most important moment,” lamented under-pressure boss, Francisco Rodríguez.

9) Betis fans need to keep the faith with Pep

Poor Pepe Mel is rediscovering that football is indeed a cruel mistress with a short memory - like Cruella Deville on gin and downers. “You can’t just throw in the towel and think that everything is complete rubbish after nine rounds,” fumed the Betis boss, fighting back by saying he does not like “the pessimism that surrounds us.”

Betis suffered at the hands of an Elche team that enjoyed a smash-and-grab performance in their 2-1 win in the Benito Villamarín on Sunday. However, this is another set of supporters that should take a quick look back at where the club once was. Like shoplifting Oxo cubes, the fans need to take stock.

Nine minutes! Nine blinkin’ minutes. That’s all Sevilla had to hang on for - with a two-goal lead, no less - to break a record that now sees the side without an away league win for 21 games. Sevilla were 2-0 up and in fine fettle before a Manucho header and a blasted free-kick from Patrick Ebert pegged the Andalusians back to 2-2, leaving Unai Emery’s head on the brink of exploding.