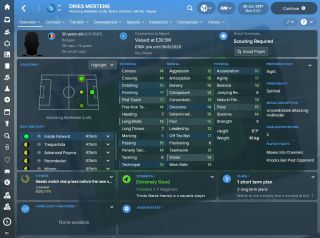 Trying to negotiate a transfer deal can prove a tough task in Football Manager. But every now and again you stumble upon a player with a release clause in their contract, guaranteeing an accepted offer if you can match it.

You can acquire some fine players this way, spanning from lower league gems to world superstars. With that in mind, we’ve picked out a selection of players whose contracts are definitely worth buying out in Football Manager 2018...

Need to know: Horn’s release clause might seem extortionate for an uncapped German keeper, but don’t be fooled - the 24-year-old boasts outstanding potential between the sticks. His asking price lands just £3m ahead of his valuation, and he benefits from superb composure, concentration and anticipation stats.

Need to know: If you’re looking for a versatile, well-rounded talent, 23-year-old Christian Norgaard fits the bill. The talented defender is allowed to jump ship for a minor fee, and can be utilised in multiple positions all over the pitch, favouring a defensive midfield role.

Need to know: Coughing up over £50m for a transfer may prove unrealistic, but Umtiti is worth considering if you can afford him. The French star is one of the best defenders in the game, and given his young age, can transform into an even better player over time.

Need to know: Although he’s only valued at £3.8m, don’t let Golovin’s expensive release clause put you off. You’ll get a lot out of the 21-year-old Russian given the right development, and he’ll slot into almost any side from the outset thanks to his midfield versatility.

Need to know: 18-year-old wonderkid Romero is a must-buy in FM 2018, sporting fantastic pace, finishing and strength stats. Stick with him long enough and he’ll not only start banging in the goals, but has the potential to become a genuine superstar.

Need to know: You’ll have to wait until July 2018 in-game to acquire Kuki, given his year-long loan assignment at Cartagena. He’s still worth buying in the interim, though, as the young Spaniard offers considerable potential at just 19 years of age.

Need to know: Another low-cost option arrives in the form of Portuguese midfielder Ribeiro, who packs an array of excellent attributes. His 16 technique, 15 composure and 15 passing stats make for a bargain buy, but expect to undergo a bidding war with a range of clubs for his services.

Need to know: Melendo is a hot prospect with scope to become a top talent in FM 2018’s later years. Espanyol have no interest in parting ways with the young midfielder, but if you’re willing to pay up, Melendo’s excellent pace, technique and teamwork abilities will enhance most squads from day one.

Need to know: Boasting a set of excellent mental stats, Serbia international Radoja stands out as a particularly good bargain in FM 2018. The defensive midfielder is singled out for his consistency and ability to step up during big matches, assuming the role of a leader both on and off the pitch.

Need to know: Believe it or not, Belgian star Dries Mertens is actually valued higher than his existing release clause in-game. You can literally buy him for less than he’s worth, and if you possess the funds, the Napoli forward is pretty much a no-brainer.