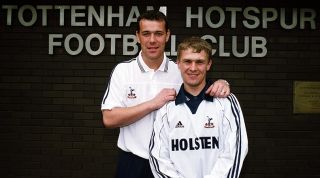 Forlan retired from international football in 2015 as Uruguay’s second most-capped player of all time (112) and their third-highest scorer (36 goals). He was the 2010 World Cup’s joint-top marksman with five goals, and was presented with the Golden Ball award as the tournament’s best player – yet he couldn’t perform at anything close to that standard in the Premier League.

He signed for Manchester United from Argentina’s Independiente as a promising 22-year-old in 2002. Forlan spent just over two-and-a-half years at Old Trafford, but in 63 Premier League games managed just 10 goals – and his first top-flight net-rippler didn’t come until his 24th appearance.

What makes his unsuccessful stint in England so surprising is that he scored regularly in every other country where he played: Argentina, Spain, Italy, Brazil, Japan, Uruguay, India and, finally, Hong Kong. A simple case of arriving too early?

Manchester City paid Real Madrid £32.5m for the Brazilian superstar in 2008, but he struggled to justify his monumental fee or replicate the form that has helped him earn 100 caps, score 28 goals and appear at two World Cups for the Seleção.

In 41 Premier League games for the club, he scored just 14 times – all of which came in his first, promising season of 2008/09. He didn’t last a full second season, though, falling down the pecking order after injury and subsequently being loaned to first club Santos in the second half of the campaign.

“I started well, but unfortunately there weren’t as many great names as there are these days,” the Brazilian lamented to FourFourTwo. “Manchester City are the only side I’ve left without winning a title.”

He’s now 35 and plays for Istanbul Basaksehir – surprise leaders at the top of the Turkish Super Lig.

The word ‘legend’ is thrown around a lot these days, especially in football, but Shevchenko is one player who earned that tag. The Ukrainian icon is his country’s highest-scoring player of all time (48 goals) and garnered the second-highest number of caps (111). He won the Champions League with Milan and only one player has ever scored more goals for the Italian giants.

In 2006, he joined Chelsea for £30.8m from Milan. Even for a Ballon d'Or winner of Shevchenko’s stature, that was an enormous fee back then – and it proved to be a massive overpayment.

He scored just nine goals in 48 Premier League appearances and was such a flop that he was deemed surplus to requirements and loaned back to Milan for the entirety of the 2008/09 season. He returned to first club Dynamo Kiev on a permanent basis in 2009, where he regained the goalscoring form that saw Milan purchase him from there in the first place.

Shevchenko retired in 2012 as one of European football’s greatest strikers. His colossal failure to shine at Chelsea will forever remain one of the Premier League’s – and indeed football’s – biggest mysteries. He's now manager of Ukraine.

Only three men have ever scored more goals for Dynamo Kiev than Shevchenko – and one of them was the other half of the iconic strike partnership he helped form.

Rebrov also performed excellently for the Ukrainian national team alongside Sheva, scoring 15 goals in 75 appearances as the more prolific striker’s support man. Yet he was a complete flop for Spurs and West Ham in the Premier League.

Rebrov signed on at White Hart Lane in 2000 at a cost of £11m, but he only scored 10 times in 59 games over the course of two seasons. He was loaned out to Fenerbahce during his time in north London and ultimately left the club on a free transfer to sign for then-Championship West Ham (record: 27 league appearances, one goal).

He finished his career at Rubin Kazan in Russia in 2009 and the 42-years-old now bosses Ferencvaros after stints at Al-Ahli and Dynamo Kiev.

Ruiz is a Costa Rican icon with 120 caps to his name and 25 international goals. He is his country’s current captain and his performances have generally been thrilling everywhere he’s played – Costa Rica, Belgium, the Netherlands and Portugal. Apart from England, that is.

Ruiz joined Premier League club Fulham for an undisclosed fee in August 2011. He played in 68 Premier League games but only managed to find the net eight times, and was loaned to PSV in January 2014 after finding playing time hard to come by at Craven Cottage. Eventually he was sold to Sporting in July 2015.

Ruiz did score this beauty, but one chip didn't fill up Fulham

Aged 33, he's now of Santos in Brazil – but remains an integral part of the Costa Rican national side as their highly experienced captain.

Brolin is one of the worst Premier League imports since its inception – which is pretty strange, because he was actually a brilliant player who was fantastic at international level and one of the finest players in the world between 1990 and 1994.

The Swede burst onto the world scene as an 18-year-old, scoring against Brazil at the 1990 World Cup – duly earning himself a move to Serie A with Parma – and going on to score 27 goals in 47 caps for his country. He starred at the 1994 World Cup as Sweden got to the semi-finals – and yet his spells at both Leeds and Crystal Palace were abysmal.

Brolin also scored this at Euro 92... the swine

Leeds signed Brolin for £4.5 million in 1995, but he piled on the weight, fell out with George Graham and couldn’t cope with the demands of England's top flight. He scored just four times in 20 Premier League appearances and was shipped out on loan twice – to FC Zurich and back to Parma – before being released on a free transfer. Brolin then signed for Palace, where he failed to score at all in 13 top-flight appearances.

He retired in 1998 after one memorable appearance – as a goalkeeper – back in Sweden for hometown club Hudiksvalls ABK.

BIG INTERVIEW Tomas Brolin – "I was bullied at Leeds, but I don't regret joining them"

We arrive at the only World Cup winner on this list – and he comes in the form of Brazil’s Roque Junior. The big centre-back played every minute of the 2002 World Cup Final victory over Germany, and signed for Leeds on a year-long loan from Milan in September 2003 having won the Champions League with the Italian side only four months earlier.

Naturally, his arrival was greeted warmly by the Leeds faithful – but if only his performances warranted it. Junior was sent off on his debut against Birmingham and Leeds conceded a shocking 19 goals in his five Premier League appearances.

Unsurprisingly, the relegated Whites didn’t make his loan permanent and the Brazilian went back to Milan, where he was quickly shipped out on loan again to Siena. He became a bit of a journeyman and retired in 2010 after a brief spell in his home nation with Ituano FC.

Not many people had heard of the 20-year-old Tomasson when he signed for Newcastle in 1997, but the Dane had already enjoyed three increasingly prolific seasons in the Netherlands with Heerenveen, the club for whom he scored 37 goals in 78 Eredivisie appearances.

He'd made his debut for Denmark four months before his £2.2m arrival in England, and seemed a highly promising prospect. Tomasson ultimately turned out to be just that – but he didn't show it during his time in the Premier League. In his one season at St. James’ Park, the young striker scored just three goals in 23 top-flight appearances and was sold to Feyenoord.

Tomasson went on to make his mark in Italy with Milan – where he won the 2002/03 Champions League – in Germany with Stuttgart, and in Spain with Villarreal. He earned 112 international caps and scored 52 international goals, making him the joint top-scorer and third most-capped player in Denmark’s history. He has since embarked on a coaching career and is currently his national team’s assistant manager.

Perhaps the most surprising thing about Altidore is the success he’s had at international level. Altidore’s first regrettable Premier League spell came in the 2009/10 season, when he joined Hull on loan from Villarreal. He scored just once in 28 top-flight games – but could be forgiven, as he was only a teenager in a poor side at the time.

When he signed for Sunderland for £6.5m in July 2013, though, after a prolific spell at AZ in the Netherlands (39 goals in 67 Eredivisie games), a lot more was expected of him. Again, he managed just one league net-rippler in 42 appearances, and swiftly swapped places with Jermain Defoe a year-and-a-half later.

Altidore has scored 41 goals for the United States in 110 caps, making him the their third-highest scorer ever, and has found his level in MLS, where the 29-year-old still plies his trade with the Canadian side. Forty-seven goals in 90 league games suggests it's probably best he stays put.

Veron was already a superstar when Manchester United signed him from Lazio in 2001 (which is probably why he cost the club £28.1m – a British transfer record at the time). He'd played club football in his native Argentina, Brazil and for two different Italian clubs – and been a full international for five years.

Things weren't so successful for him in England, though. The midfielder spent two seasons at Old Trafford – playing 51 league games and netting seven times – but rarely looked like the player Alex Ferguson thought he was signing, despite the Scot's vociferous protestations.

Chelsea took a chance on him for a cut-price £15m, but his spell at Stamford Bridge was even less successful. He played just seven times in the Premier League for the Blues and was loaned out to both Inter and first club Estudiantes during his time in west London.

Considering he'd shone in Serie A and earned 73 caps in a fine international career for Argentina (including a 2010 resurgence under Diego Maradona), it was a surprise. Veron is now the chairman of Estudiantes, for whom he briefly came out of retirement in 2017 after fulfilling a promise to return if the club sold enough executive boxes.

INTERVIEWS What’s it like to be a big-money flop? 5 men who've been there tell FourFourTwo

Radamel Falcao’s scoring record throughout his career – both at club and international level – has been nothing short of phenomenal. El Tigre has netted regularly in the top divisions in Argentina, Portugal, Spain and France. He’s also Colombia’s all-time top-scorer with 33 goals in 83 caps – but he simply couldn’t cut it during two separate loan spells in the Premier League.

Falcao joined Manchester United from Monaco in 2014, costing the Red Devils £6m and some eye-watering wages despite only joining on loan. After an injury-ravaged season at Monaco he managed a meagre four goals in 26 league appearances.

United didn’t want to make the deal permanent, but Chelsea took him on loan in the hope that he might rediscover his touch. Falcao didn't; in fact his record was even worse, with just one goal in 10 league games.

Now 33, he’s still at Monaco and still scoring regularly despite their struggles.