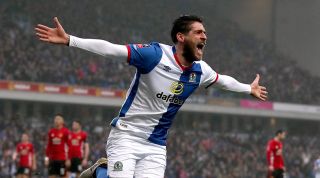 Making a successful step up from the Championship to the Premier League is difficult for any player. There’s no shortage of goalkeepers, defenders and midfielders who beat a retreat to base camp, and there’s no shame in that. Strikers, though, suffer the most scrutiny.

Put a hat-trick past Stephen Bywater, did you? Racked them up against Rotherham? Yeah, well, how’s your strike rate now? Welcome to the Best League in the World, chump. (So top-flight defenders seem to say.)

Many a forward loses their lethal edge on this journey, turning from James Bond into Johnny English. Some second-tier hotshots aren’t even given an opportunity to show the Premier League what they have or haven’t got. Take Ross McCormack – something Aston Villa have been saying to quite a lot of clubs lately. Before he became a punchline for bad jokes, the Scot had scored 17 or more goals in a Championship campaign on five separate occasions for Cardiff, Leeds and Fulham, including 66 goals in 135 games between 2013 and 2016. Yet he was never taken up by a top-flight team.

There’s still time for some of these strikers to prove people wrong. We start, though, with an England international (one cap, one goal) who played nearly a century of Premier League matches but couldn’t shake off the reputation of, well, ‘being a bit Championship’.

When Portsmouth bought Nugent in July 2007, Sky Sports pundits analysed the 22-year-old’s highlights reel, which included a goal for Preston in the FA Cup against fellow Championship dwellers Crystal Palace. There was a collective chuckle as it was suggested he ‘might come up against better defending in the Premier League’.

This was correct. Nugent didn’t score once in his 15 league appearances that season, though his confidence can’t have been helped by Harry Redknapp declaring in late August that he might sell the player he’d bought for £6m seven weeks previously, in order to raise funds for “somebody who can get us 15 to 20 goals a season”.

So, it’s extremely satisfying that Nugent’s first Premier League goal, in January 2009, came against Redknapp’s Spurs. He mused: “It’s taken a while but I timed it perfectly, I think.”

Discount Chopra’s last two seasons in England with Ipswich and Blackpool, when his runaway train of a personal life finally came off the rails, and a pretty decent record of 74 goals from 238 Championship games becomes a very decent 70 from 187.

The Premier League was another world for Chopra – specifically, the north-east. Newcastle didn’t trust him; neither did Sunderland, because he’d played for Newcastle. Only at Cardiff did ‘Chops’ look a prime cut.

The big caveat is that Rhodes was never really given a chance in the Premier League. Now 28 and on loan at Norwich (14th last season) from Sheffield Wednesday (15th), he seemingly never will be.

But perhaps it’s significant that although Rhodes has commanded consecutive transfer fees of £8m, £9m and £10m, they all came from Championship clubs: Blackburn, Middlesbrough and Wednesday. His 208 Premier League minutes followed Boro’s promotion. There are concerns over his all-round game: Gordon Strachan said when Scotland manager that Rhodes needed to play in a front two, which is why he has only 14 caps for a national team not blessed with goalscorers.

Even so, you’d be forgiven for thinking an astonishing goal haul might give Rhodes the benefit of the doubt. His year-on-year Championship return was 29, 25, 21 and 16 before Boro went up. Only at Hillsborough has his rate finally dipped below one in two. Yet Premier League clubs have decided: where they’re going, they don’t need Rhodes.

Look up ‘diminishing returns’ in the dictionary and you’ll find… nothing, because it’s a phrase, not a word. But if it was a word, you’d find a picture of… OK, you wouldn’t find a picture of Danny Graham, because dictionaries don’t have pictures. But if – hang on, we’ll start again.

Graham netted 12 goals for newly-promoted Swansea in 2011/12 after lighting up the Championship with Watford (24 goals!). This good start was enough to convince Sunderland that the Gateshead-born Newcastle fan was worth buying in January 2013, even after he’d lost his place and Sunderland’s own fans had booed him. He scored once in 37 games there, and once in 18 on loan at Hull, then returned to banging them in at a lower level for Middlesbrough and Blackburn.

It’s easy to forget that Lita was just 19 when he arrived on the scene with League One’s Bristol City, 20 when he helped Reading to a record second-tier points tally, and 21 when he made his Premier League bow. He’s only two years older than Jamie Vardy.

Nor was that top-flight introduction a disaster by any means: despite not starting regularly, Lita scored seven league goals, plus another seven in the cup competitions, as Reading finished eighth. Ten of those 14 goals came in the space of a dozen games.

It didn’t last, however. Lita couldn’t take his few subsequent chances with Reading and Swansea, even as he scored with ease on numerous second-tier loans. Frustrating.

Harsh? Probably. But 25 goals in 59 games on loan from Chelsea to the promotion-chasing pair of Derby and Middlesbrough generated expectations that haven’t been met. Of Bamford’s three Premier League loans to Crystal Palace, Norwich and Burnley, two ended prematurely and none brought any goals.

Boro bought Bamford from a nonplussed Chelsea, but he’s starting every other game in the Championship. The 24-year-old has a big 2018/19 ahead.

The somersaulting Welsh-Zambian striker and underrated tweeter fired Cardiff to two promotions before hitting 21 goals in his first second-tier campaign – so it’s no wonder West Brom thought he could handle one more step up. A return of 10 Premier League goals wasn’t bad, either, as only 18 of his 31 appearances were starts.

It didn’t satisfy Bryan Robson, though, who used Earnshaw from the bench (it was as a sub that he scored the hat-trick which would make him a pub quiz question) before letting the poacher go to Championship Norwich, where he’d show his thirst for goal by notching 27 in 45 games. Derby gave him another shot at the Premier League in 2007/08 and… well, we know what happened there.

Dropping down again, Earnshaw plundered 38 in 101 for Forest, toiled back at Cardiff and played 20 minutes for Blackpool. At his peak, though, he scored 49 goals in 95 Championship games, and that’s some rate.

READ Derby's 2007/08: the Premier League's worst ever season, told by the men who were there

No, Ince isn’t a striker. But he is an attacking midfielder with a one-in-three strike rate in the Championship, and he embodies the gulf in divisions possibly better than anyone.

Goals came regularly for Blackpool and Derby either side of failures to launch at Crystal Palace and Hull. Although Huddersfield never expected Ince to take a rate of 0.32 goals per game into the Premier League, they’d have liked their big buy – playing behind the striker for every minute of almost every game – to register his first goal or assist before Boxing Day. Alex Pritchard arrived in January and managed two in his first three starts.

Ince is 26 and has signed for Stoke (in the Championship). Maybe this is as good as he gets.

In 2009, Wigan paid Swansea £2m to buy Scotland, which will confuse bad historians in the future. He was 30 but something of a late bloomer who blossomed for Ipswich after one Premier League season brought him one goal – in a defeat to Fulham. Oh well.

Another late bloomer, Gayle (now 28) made an incredibly rapid rise from the Conference North to the Premier League within two years, and his all-time league record outside the top flight stands at 121 games, 72 goals. In fairness, his minutes-per-goal ratio in the Premier League isn’t bad, either – a strike every 224 minutes equating to one every two-and-a-half games, playing for two mid-table teams.

So why is Gayle in this list? Because top-flight managers seem reluctant to put their faith in him. Just 50 of his 99 Premier League appearances have been starts, and his competition hasn’t been stellar: at Crystal Palace he was behind Marouane Chamakh, Cameron Jerome, Fraizer Campbell and finally Connor Wickham in the pecking order, while Joselu was often preferred as a focal point at Newcastle last term. That must hurt.

While a rate of one goal every five games isn’t totally abysmal in a struggling team – and all four of King’s Premier League teams were struggling – his record in the old Division One and Championship hinted he could do better. King scored plenty in second-tier spells with Gillingham (40 goals), Nottingham Forest (10), Leeds (0), Watford (32), Coventry (12) and Birmingham (29). OK, maybe not Leeds.

An important caveat: 17 of those 24 Premier League appearances were from the bench. A loan at West Brom provided most of them; later, newly-promoted Watford bought Vydra, twice a loanee at Vicarage Road, then gave him two minutes as a substitute against Chelsea before selling up. Sorry, Matej, you had your chance.

In the Championship it’s feast or famine, with 57 of Vydra’s 65 goals coming in three of his five campaigns at that level. After a two-year dry spell at Reading and then Derby, he rediscovered his shooting boots at the iPro Stadium last season (the natural place to look, surely). Being the division’s top scorer wasn’t enough to make Gary Rowett pick him in the second leg of last season’s play-off semi-final, mind, not when there’s…

Official! The 20 players with the best minutes-per-goal ratio in Premier League history

Yet another ex-Cardiff goalsmith, Jerome retrained as a workmanlike all-round centre-forward after leaving Wales for Birmingham at the end of 2005/06. He has never bettered the teenage Jerome’s 18-goal return that season.

In defence, his game is about more than goals (although he found plenty at Norwich in recent Championship campaigns). Even so, the fact that more than half of his Premier League strikes came in his first two seasons there with Birmingham means that, across five campaigns since then with the Blues, Stoke, Crystal Palace and Norwich, Jerome has played 146 Premier League matches and scored 15 goals. Again, that’s 15 goals in 146 matches.

Jerome sits just outside the top 50 for all-time Premier League appearances by a striker, one behind Fernando Torres and five ahead of Sergio Aguero. He has scored fewer goals than Mark Noble. We don’t expect much – but we expect more than this.