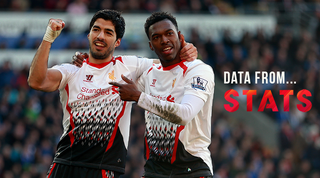 Who’s the better goalscorer: Harry Kane or Mo Salah? Should Manchester City’s line be led by Sergio Aguero or Gabriel Jesus? Was a young Michael Owen as good as we remember?

Note: all data from STATS, players ranked on minute-to-goal ratio over a minimum of 1,350 minutes (approx 15 full games)

Although we can’t definitively answer these questions for you, our buddies at STATS have provided us with a useful measure: specifically, how often these players find or found the net.

Every Premier League footballer since 1992 has been inputted into the calculator, and now that we’ve sloughed off the randoms – sorry, Chris David fans, but our cut-off was 1,350 minutes (i.e. 15 full matches) – FourFourTwo can proudly present the top 20 minutes-per-goal ratios (as opposed to goals per minute, which would be the sign of a particularly prolific striker).

There are surprises. There’s a current Bolton player and a former Bolton player. However, we start with the man who once had the world at his feet...

Super-subs naturally have excellent minutes-per-goal ratios, especially when they score four in one 20-minute cameo against Nottingham Forest. A third of Solskjaer’s Premier League appearances came from the bench.

His staying power was remarkable, though. In 11 seasons, the deadly Norwegian never started the most games of Manchester United’s strikers, spanning Eric Cantona to Wayne Rooney, yet the goals still came.

You know, Bolton’s Croatian striker. No, Nikola Kalinic was Blackburn. Not Nikica Jelavic, either, nor Mladen Petric. Yes, there were a few of them at the time.

In 2010/11, Klasnic started zero Premier League games and still plundered four goals. The next season, he scored two and assisted two in a 5-0 drubbing of Stoke. In a word: efficient.

Can’t do it in England, eh? Ibrahimovic arrived with a point to prove, and he proved it. Critics say his static game slowed Manchester United’s attacks, and they’re not necessarily wrong, but the striker did what Jose Mourinho wanted. You can’t argue with his 2016/17 rate of 143 minutes per goal, or 111 minutes per goal or assist.

It shouldn’t be a surprise to see the Premier League’s top goalscorer in this list, but Shearer’s job wasn’t easy when Newcastle were a bottom-half side for five of his 10 seasons there.

Though 58 penalties add gloss to his 260-goal tally, Shearer’s hit rate is nonetheless impressive, especially at Blackburn: 112 goals in 138 league games is extraordinary.

Sturridge has a better strike rate than his critics might expect, but then his effectiveness in front of goal is rarely what they’re criticising. A more damning statistic is that he hasn’t reached 200 Premier League appearances despite making his debut more than 11 years ago.

Still, he’ll always have the SAAS season of 2013/14: Suarez And Also Sturridge.

Are you reading this, Antonio? That guy you bombed out wasn’t bad.

On two occasions Diego Costa scored 20 goals in helping Chelsea to win the Premier League; once under Jose Mourinho and once under Antonio Conte. Between those triumphs, he went on a scoring spree under substitute teacher Mr Hiddink. Diego and Guus, showin' him how to play, H-I-D-D-I-N-K...

After 49 league starts and 54 sub appearances, it’s easy to guess why Hernandez left Manchester United for Bayer Leverkusen. Why he joined a crumbling West Ham is less obvious.

Still, he’s added seven goals to his Premier League tally despite starting only two-thirds of the time and being picked as the least natural winger since Gary Lineker at Barcelona.

Crespo was actually contracted to Chelsea for five years, although he spent only two of them in England. Between loans to both Milan clubs, the Argentine striker scored 10 league goals for Claudio Ranieri (four of them coming in defeats) and 10 for Jose Mourinho (all scored in victories).

Somehow that contrast doesn’t come as a complete surprise to us.

At his (relatively late) peak, Van Persie was a penalty-box striker so deadly that Alex Ferguson broke his own rules and spent £24m on a 29-year-old.

The Dutchman already had a healthy hit rate at Arsenal, before his 30-goal campaign in his final season there took him to Manchester United. A second Golden Boot and a first Premier League title followed.

The Uruguayan’s minutes-per-goal ratio for Liverpool was improved by his preposterous final year, 2013/14, in which he matched the 38-game Premier League season record of 31 goals and could’ve passed 40 had he been on penalty duties (Steven Gerrard took 11 across the campaign).

With another dozen assists, Suarez contributed to a goal every 69 minutes that season. Nice.

Two words: poacher’s instinct. Iheanacho set the tone with his first Manchester City goal, beating three Crystal Palace players to a loose ball for a stoppage-time winner. It’s not just tap-ins, mind: another injury-time winner, against Swansea, looped in off his back.

They all count. And, seven months after his £25m move, he’s finally scored a league goal for Leicester.

Van Nistelrooy is perhaps unfortunate to be considered a good striker rather than a great one, because a 12-year peak return of 75 goals in 91 games for PSV, 150 in 219 for Manchester United and 64 in 96 for Real Madrid is pretty darn reasonable.

Sixth? What’s that all about, Alfie?

Le Fondre’s only Premier League campaign, 2012/13, featured more goals (12) than starts (11) – his final eight strikes all came from the bench (well, not literally) as he secured super-sub status. He scored seven equalisers and two winners for Reading, and was named January’s player of the month despite not playing 90 minutes… in total.

From the ridiculous to the sublime, Henry kicks off our top five.

To average a goal for every two hours of Premier League football played is impressive; to maintain such a rate across eight years is imperious. To do that while setting a yet-to-be-broken record for most assists in a season (20 in 2002/03) is taking the piss, frankly.

He arrived straight from the Brazilian league and joined a Manchester City team with one of the greatest strikers English football has ever seen. He settled immediately, contributing 11 goals and assists in his 10 appearances of the 2016/17 season, and even pushed Sergio Aguero out of the team on occasion before injury.

At some point, Kane’s Premier League scoring rate will slow down. It has to. After season-on-season returns of 21, 25 and then 29 goals in the last campaign (at an obscene rate of one every 87 minutes), 2017/18 promised 33 – and maybe he’d have found the required nine goals from eight games if it wasn’t for this injury.

In 2014, an unusually busy January saw Chelsea sell Kevin De Bruyne and Juan Mata while buying Nemanja Matic and Mo Salah. When the latter left Chelsea, it followed two goals in nine hours of football – which is why he isn’t a distant first here. Because, almost unbelievably, Salah is averaging a Premier League goal every 96 minutes for Liverpool.

Ranked! Every Premier League goalkeeper based on save percentage in 2017/18

As superb as Salah has been, it’s only right that our number one is a player with over 200 Premier League appearances to his name.

We don’t know what’s the more incredible statistical achievement for Aguero: to hit such heights that in Manchester City’s 2013/14 title triumph he averaged a goal every 90 minutes and a goal contribution every 67, or to generally score so many in the league (143 now) at a consistent rate – under 100 minutes per goal in four of the past five seasons.

Aguero turns 30 in June. Although he’ll no doubt keep scoring for a while yet, we should appreciate this phenomenon here and now.