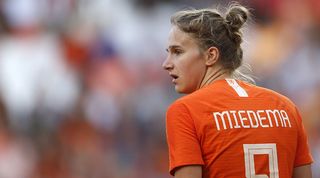 The youngest Lioness has already experienced success with her country, having captained the under-17s to third place at the 2016 European Championship. Stanway also won the silver boot at the Under-20 Women’s World Cup, and only fell short of the top prize by virtue of assists.

The 20-year-old has managed 34 goals in 86 appearances for Manchester City, including an FA Cup final goal at Wembley when West Ham were vanquished 3-0. She also developed a key partnership with forward Nikita Parris which could prove crucial to England’s chances in the competition.

Before Stanway turned professional, she queued up to get her picture taken with now-captain and team-mate Steph Houghton. Now she’ll be lining up alongside her former hero as an equal.

The Dutch id expected to challenge for Golden Boot honours and already has 58 goals in 75 appearances for her country – meaning she’s only two away from being her country’s outright all-time top goalscorer. Vivianne Miedema is 22 years old.

She won the WSL title with Arsenal as part of a Dutch quartet, and with it claimed the PFA Players’ Player of the Year gong alongside compatriot Virgil van Dijk.

Known for her intelligent use of space and devastating goalscoring, Miedema will be a huge threat to defenders in France – and at such a young age, there’s still so much ahead.

Shaw became the prime reason behind her country making their first ever Women’s World Cup, scoring more goals than any other player in qualification – 19 in only 12 matches across two rounds.

She has overcome far more than most: three of her seven brothers were murdered in Jamaica, and a car accident claimed the life of another. One of her cousins was electrocuted.

The remarkable 22-year-old played for Jamaica’s U15s, U17s and U20s before moving to the USA to play junior college soccer and start a scholarship at the University of Tennessee. She will be vital to her country’s hopes in a nightmare group alongside Brazil, Italy and Australia.

Scotland forward Cuthbert played a major role in Chelsea’s Champions League semi-final run, scoring a crucial goal against holders Lyon which went on to be voted the best goal of the competition.

The 20-year-old has also become an important asset for her country. Cuthbert netted four goals in qualifying, taking the Scots to top spot and securing their place above favourites Switzerland in Group 2. Last month, she also struck an incredible goal against Jamaica as Scotland beat the Reggae Girlz 3-2 in their final friendly before the World Cup.

Despite being the youngest member of her country’s squad, Cuthbert could also be one of its most crucial. For a player who has already enjoyed such an incredible year, a fine World Cup could help shape her future.

Guijarro only turned 21 last month but has gained vital experience with one of women’s football’s strongest teams in Barcelona. Although she was an unused substitute in the 2019 Women’s Champions League Final, she has played 82 games for the Blaugrana since joining in 2015.

The central midfielder has made an even bigger impact for Spain. La Roja were runners-up at the 2014 U17 World Cup, but went one better at the 2017 U19 Euros – with Golden Boot-winning Guijarro scoring a 90th-minute winner in the final.

Guijarro also won both the Golden Boot and Ball at the U20 World Cup last year, demonstrating her fearsome scoring prowess once more.

Ada Hegerberg: why the world's best female footballer won't be playing at the Women's World Cup

Shuang is the only player in China’s squad to ply their trade abroad, having joined PSG in August 2018 – but may soon pave the way for others to follow in her footsteps.

She has scored seven goals and carved out eight assists in just 18 appearances since arriving in the French capital, and also became the first Chinese player to score in the Women’s Champions League.

Hailed as the ‘Lady Messi’ back home, Shuang has netted 25 goals for her country – most memorably in a shock 2015 victory against the USA which ended their opponents’ 104-match unbeaten home streak. Oh, and she was also named the 2018 AFC Women’s Player of the Year. Pretty impressive at 24.

Being part of the best team in the world means it’s sometimes difficult to make a name for yourself. But rising star Pugh has done just that, and is often referred to as one of the quickest players at this World Cup.

Whether she starts or claims her place as a first-choice substitute fighting among American greats including Alex Morgan and Lindsey Horan, Pugh remains an exciting player for this competition.

Japan remain strong contenders in the competition, having finished as runners-up in 2015 following victory over England in the semi-finals. Although they have a selection of experienced players in their ranks, including Lyon’s Saki Kumagai and Reign FC defender Rumi Utsugi, the Asian nation are arguably better known for their intriguing collection of youth right now.

Indeed, 14 of Japan’s squad are 23 or under, while their oldest player is 31. Among those developing hotshots is 19-year-old striker Endo, who has shown her potential with three goals in the 2016 U17 World Cup and two more at the U20 edition a year later – a tournament Japan won.

Endo only debuted in February, but could be an intriguing wildcard option off the bench in France.