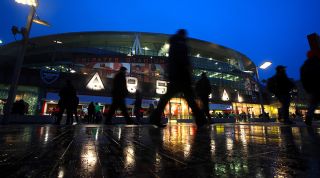 1. They can actually win a European trinket

Arsene Wenger signed a new two-year contract back in May and outlined his determination to “continue making history with Arsenal and winning trophies”. He presumably had the Premier League in mind – however unlikely that may seem – but the Frenchman will be painfully aware of the lack of European silverware in Arsenal's trophy cabinet.

One Fairs Cup – won in 1970 – and a Cup Winners' Cup, secured in dramatic fashion against Parma in 1994, bears little or no comparison with rivals Manchester United and Liverpool, who have stacks of European pots tucked away in their club museums. It reinforces the view that, big club though Arsenal undoubtedly are, they’re not quite part of the continental elite.

Despite steering Arsenal to the 2000 UEFA Cup Final – lost on penalties to Galatasaray – and the Champions League final against Barcelona in 2006, Wenger has thus far drawn a blank in Europe. He will, therefore, be ultra keen to change all of that in 2017/18. As the Frenchman himself said in May, following the FA Cup final win against Chelsea: “Fans at Arsenal will always remember the trophies their club won.”

This season’s Europa League represents a golden opportunity for Wenger to finally win European silverware for his club.

It may be heralded as the promised land, but in reality the Champions League has been little more than a source of frustration - and, on several occasions, downright misery - for Arsenal fans. Throughout innumerable group stage matches under the lights, lethargic crowds have failed to rustle up a great deal of enthusiasm for a raft of dead-rubber matches.

Then when it came to the last 16, Arsenal supporters have spontaneously combusted in frustration when their side claimed pyrrhic victories against Europe’s finest. A 3-0 home victory over Milan in 2012 failed to overturn the horrendous 4-0 clobbering at the San Siro a fortnight earlier. Then there was a spirited 2-0 victory in Munich in 2013 – but Arsenal still went out having lost the first leg 3-1.

Meanwhile, last season’s turkey shoot affair against Bayern (Arsenal lost 10-2 on aggregate) and the chastening 5-1 aggregate clobbering by Barcelona in 2016 merely destabilised the squad and made the natives more restless. Truth be told, few Arsenal supporters genuinely looked forward to watching the likes of Lionel Messi and Robert Lewandowski play at the Emirates on big European nights; it usually only results in pain and humiliation.

One day, Arsenal fans may once again relish the chance to see their team playing on the biggest stage, but not right now. There was something Sisyphus-like about watching Arsenal labour to qualify for a tournament they could never hope to win, then seeing them crash and burn every February. It was pointless, futile and depressing. Their supporters won’t have to endure that type of carnage again in five months' time - provided Bayern don’t finish third in their Champions League group, of course.

3. But Europa could be an excellent route back to it

The days of mocking rivals Tottenham for playing on “Spursday nights” are officially over. Now that the Gunners’ 20-year unbroken record of qualifying for the Champions League has ended, fans must become accustomed to the new reality that surrounds the club. In short, they must stop the middle-class meltdowns on Twitter and man up.

Despite a sizeable contingent of supporters urging Stan Kroenke to “get out of our club”, the Arsenal owner isn’t going anywhere fast. And on Stan’s watch, a top-four finish will be extremely difficult to achieve for some time to come. Like it or not, Arsenal have slipped in the Premier League’s pecking order and need to box clever.

Much though it would pain Wenger to do so, the Frenchman should take a leaf out of Jose Mourinho’s book and emphasise the importance of the Europa League to some of his restless stars. Mourinho was self-aware enough to realise that the prospect of a top-four place was unlikely for Manchester United last term. By eventually committing to winning the Europa League and thereby qualifying for the Champions League via another route, Mourinho adopted a typically pragmatic approach.

Given Arsenal’s shaky league form at the start of 2017/18, Wenger would be wise to indulge in a spot of realpolitik, embracing the situation his Gunners team finds itself in to achieve the best outcome possible for himself and the club.

4. An opportunity for experimentation

As far back as 2006, football writer Henry Winter commented: “On too many occasions, Arsene Wenger has failed to appreciate that European football is like a game of chess. You have to be patient, adapt your tactics accordingly, and pace yourself within the match. Arsenal have too frequently played at one pace and with one approach to matches.”

Eleven years later, one could build a strong case that Wenger has consistently struggled to grasp that concept, and perhaps it's too late to teach an old dog new tricks. But the Europa League gives Arsenal the chance to experiment tactically (Wenger has already intimated he will vary his structure, deploying 3-4-3 or 4-4-2 when appropriate), blood emerging talent like Reiss Nelson, test the fitness and endurance of Jack Wilshere, and maybe, just maybe, slip back into the culture of winning matches on big European nights.

Not before time - Arsenal might actually enjoy their new European adventure.

When L’Equipe editor Gabriel Hanot first badgered UEFA about setting up structured European competitions between clubs in 1948, he urged administrators to consider “the endless possibilities for friendship, adventure and travel for football fans in the post-war world”.

With trips to Cologne, Belgrade and Barysaw in the offing for Arsenal’s travelling fans, the chance to watch European football for only £20 and just one working day to get through after a late night in London before the weekend, playing in the Europa League is hardly the end of the world for supporters.

7 of football's most heroic performances by teams with 10 men

The Gunners have enjoyed some fine moments in the Champions League in the last 20 years, but they enjoyed finer ones still in the Fairs Cup and Cup Winners' Cup, winning both trophies. Supporters shouldn’t be toffee–nosed about the Europa League; it’s time they genuinely followed Arsenal over both land and sea – and hopefully for them, on to victory.

The tournament provides a chance to win a trophy, and Arsenal’s history and raison d’etre is about doing just that. Regardless of the white noise which will inevitably surround the club this season, winning the 2018 Europa League Final in Lyon would still represent a monumental achievement for Arsenal. They need to give it their very best shot.