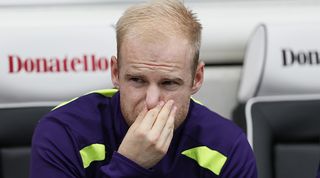 Grouped together because they’re symptomatic of Everton’s muddled (to choose a kind word) summer. On paper, the duo looked like strong – if expensive – acquisitions for the Toffees in their bid to break the glass ceiling above them. But the reality has been troublingly different.

In Sigurdsson’s case, Everton have so far failed to make the most of a player who essentially guarantees goal contributions – over the last three Premier League seasons, the Icelandic star was directly involved in 52 net-ripplers as the focal point of a weaker Swansea side. Everton have faced strong opposition so far this season, but haven’t yet got anything near what they can from their struggling playmaker, who was dropped altogether for Sunday’s 2-0 defeat at Leicester.

Klaassen’s season is going even worse: the Dutchman of over 50 European games has started only four matches in the Premier and Europa Leagues so far this season, and lasted no more than an hour in any of them.

Two playmakers who can't play in the same team, according to current manager David Unsworth – who simply decided to field neither of them at Leicester. "Can they all [including Wayne Rooney] play in the team at the same time? Probably not," said the Toffees' stand-in chief. "If you played in a certain style and certain way, you could fit them in. But what I really want to do is play players in the right positions and play them where they are comfortable."

Leicester have found it hard to integrate new players in their first team since winning the title, but Iheanacho was always going to find it tougher than most.

Jamie Vardy is absolutely essential to the Foxes’ playing style, and traditionally hasn’t found too much success playing in front of anyone other than Shinji Okazaki. Realistically, then, it’s either Vardy or Iheanacho where Leicester’s managers are concerned – and there’s only one winner in that battle.

Iheanacho arrived from Manchester City unfit and then picked up a niggly injury, but since then he’s only started one Premier League game – alongside Vardy, in a drab 0-0 draw at Huddersfield. Truthfully, it feels like only an injury to his rival would make things better for the 21-year-old.

Riedewald is the victim of being Frank de Boer’s sole signing as Crystal Palace manager. The talented 21-year-old was snared for a bargain £8m with the view of helping soothe the transition to a new style under the Eagles’ fresh incumbent, but that doomed project was binned after only four league games when De Boer got De Boot.

Since then, Riedewald has found his own versatility unhelpful. Scott Dann and Mamadou Sakho have been Roy Hodgson’s preferred centre-back pairing, and the young Dutchman has been unable to oust the more experienced Yohan Cabaye-Luka Milivojevic partnership in central midfield.

There’s plenty of promise – most notably a pair of strong midfield outings in the cup – but really, Riedewald symbolises the lack of coherent thinking at Palace last summer.

Beanpole Spaniard Fernando Llorente plundered 15 goals to keep Swansea safe last season, and the Welsh side were always going to find it tough keeping him once it became clear that Chelsea and Tottenham would battle for him on deadline day.

Paul Clement had banked on Tammy Abraham easing the burden up front, but the Chelsea loanee’s workload was rapidly increased thanks to Llorente’s late departure.

With little time to find a replacement, Swansea turned to the man who’d fired 26 goals in 54 Premier League games for the Welsh side from 2013-15, and trousered them £25m from Manchester City after that. The trouble is, though, that Wilfried Bony has been a shadow of that player for almost three years, in which time he’s played 50 top-flight games and scored eight times.

Inexplicably back with a No.2 shirt on his back, the Ivorian has missed the last three games through injury but seems far from the kind of threat Swansea need to keep their heads above water this season. At £12m, he wasn’t exactly cheap either.

The Englishman had his heart set on Liverpool from the moment they showed interest; so much that he turned down a better-paid offer from Chelsea.

The ultimate factor was a desire to establish himself in central midfield, but there haven't been many signs of that happening yet. In fact, he’s played almost everywhere else for the Reds so far, and hasn’t started a Premier League game for them yet.

It’s not even like it’s been much of a surprise, though, what with Jordan Henderson, Emre Can and Georginio Wijnaldum having established a solid triumvirate this season. For the recent thumping at Spurs, James Milner was preferred to Oxlade-Chamberlain when Wijnaldum missed out.

It’s still early days for the 24-year-old, but it’s not exactly clear cut that he’ll get what he wants eventually. Oxlade-Chamberlain offers a little more dynamism than his competitors, and Can’s contractual uncertainty could pave the way for him in future, but right now he’s no better off than he was at Arsenal.

For over a month, Bednarek was Southampton’s only summer signing after joining the south coast side on July 1. The 21-year-old Polish defender arrived with hope in his heart having established himself at Lech Poznan, and knew he was joining a team whose star player – in his position, no less – would surely be leaving.

On the same day, Southampton announced a new contract for young stopper Jack Stephens. In late August they signed Lazio’s Wesley Hoedt. When the transfer window had closed, Virgil van Dijk was still a Saint (albeit one repenting for his sins).

Essentially, Southampton now have six centre-backs on their books (including Maya Yoshida and Florin Gardos) and Bednarek is fifth choice among them. Even if Van Dijk leaves in January, the Pole’s chances of immediate football look bleak. It’ll likely be a while before he gets a proper chance at St Mary’s – and will probably happen for him at another club on loan first.

The £8m arrival from Derby has good reason to be concerned at this early stage of the season. That he only made his Premier League debut with a 10-minute cameo off the bench against Stoke on Saturday was bad enough. That he’s only been named in three of Marco Silva’s 10 matchday squads this term is much worse.

Silva suggested post-match that the 22-year-old Englishman had only played because of injuries elsewhere. With Roberto Pereyra expected back soon, Hughes is surely set for another lengthy spell of thumb-twiddling – a great shame considering this looked like a fine move for all concerned back in June.

QUIZ! How many of the 30 most successful Champions League managers can you name?