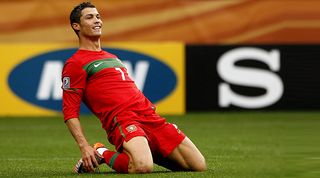 Six goals as captain is the World Cup record that Diego Maradona owns. Lionel Messi, who scored four times with the armband at Brazil 2014, requires one to go joint-second beside Gyorgi Sarosi, Uwe Seeler, Karl-Heinz Rummenigge and Lothar Matthaus – and two to equal the fellow Argentine No.10 he's chasing.

Maradona’s record for the most World Cup appearances as captain (16) is also under threat from 39-year-old Mexico defender Rafa Marquez (14).

135 years and three months: the combined age of Oscar Tabarez and Fernando Santos if Uruguay and Portugal meet in the last 16 – the oldest combined age for two coaches in a World Cup match.

Tabarez and Roy Hodgson had a cumulative age of 134 years and two months when Uruguay met England at Brazil 2014, surpassing the 133 years and nine months Greece’s Otto Rehhagel and Nigeria’s Lars Lagerback accounted for at South Africa 2010.

Five goals in multiple World Cups – a feat that eluded Pele, Ronaldo, Gerd Muller and other monster marksmen – is something only three men have managed. Peru’s Teofilo Cubillas struck five times at Mexico ‘70, then five at Argentina ‘78, before failing to find the target at Spain ‘82. Miroslav Klose netted five goals at Korea/Japan 2002 and five at Germany 2006, then contributed four and two respectively in the following two tournaments.

Over to Thomas Muller, then, who got five apiece in South Africa and Brazil, and now has the chance to become the first player to score more than four times in three World Cups.

Five successive World Cup victories (of any kind, so including extra-time and/or penalties) is the run on which Germany will begin at Russia 2018. Only two countries have managed more than six on the spin: Italy (7) between 1934 and ’38, and Brazil (11) between 2002 and ’06. Monstrous.

Can a High Dam down a dragon?

Aged 43 years and three days, Faryd Mondragon became the oldest player in World Cup history when he came on for Colombia against Japan at Brazil 2014, outranking Cameroon’s Roger Milla.

Essam El-Hadary will be exactly 45 years and five months when Egypt begin their campaign against Uruguay. ‘The High Dam’ is even older than three coaches at Russia 2018 – Aliou Cisse (Senegal, 42), Mladen Krstajic (Serbia, 44) and Roberto Martinez (Belgium, 44).

Six matches unbeaten in the World Cup is the CONCACAF record that Mexico set across USA ‘94 and France ‘98. Costa Rica survived five games without defeat at Brazil 2014, despite being heavy underdogs against Uruguay, Italy, England and the Netherlands. They will tie Mexico’s feat if they avoid defeat against Serbia, and eclipse it if they do the same against Brazil.

Only three men have managed to score in four World Cups – Uwe Seeler, Pele and Miroslav Klose. Another three – Australia’s Tim Cahill, Mexico’s Rafa Marquez and Portugal’s Cristiano Ronaldo – will join them if they're on target in Russia.

Only one player has made more than seven World Cup appearances and averaged more than a goal per game: Gerd Muller, who managed 14 in 13 for West Germany over the 1970 and ’74 editions. James Rodriguez, who plundered six goals in five games in his first World Cup, will become the second if he plays more than once in Russia and averages at least a goal per game.

Encouragingly for the Colombia No.10, he will go into the Senegal game buoyed by an excellent record against African sides. Japan, meanwhile, have struggled defensively of late and Poland, staggeringly, conceded more than 30 countries in European qualifying.