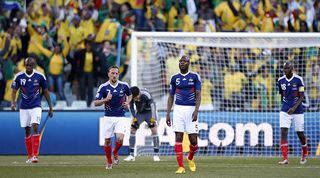 Although rumours in the national press about players testing positive for drugs on the eve of the tournament proved false, Portugal players’ involvement in the notorious Saltillo Affair (or O Caso Saltillo in Portuguese) overshadowed their first World Cup in 20 years. The players, led by midfielder Carlos Manuel, threatened to pull out of the tournament when they failed to receive advertising payments owed to them by the Portuguese FA from Adidas products and Cristal Beer.

After two weeks of sunning themselves by their hotel swimming pool and wearing their training kits back to front – so as to avoid displaying any brands, naturally – the players finally received their money.

Ringleader Manuel promptly scored the team’s winner against England in their opening game, but subsequent losses to Poland and Morocco meant the Portuguese players – who were accused of heavy drinking by their national press – finished bottom of the group. Heartbroken national coach Jose Torres sighed: “I’m amazed the players even got themselves out onto the pitch at all.”

“You boys are greedy,” barked West Germany coach Helmut Schon at his charges, “and if people find out what you're doing, they will spit on you in the street.” The reason for Schon’s ire was that his squad – offered around £4,900 per man in bonuses – was pushing for a figure more in line with the Dutch and the Italians; around £16,900. At one point, Schon threatened to pick a second-string side for their opener against Chile, and Paul Breitner threatened to pack his bags and leave altogether.

Fortunately, skipper Franz Beckenbauer rallied the troops, but his side suffered a shock 1-0 loss to neighbours East Germany in the group stage, after which the players smoked and drank until dawn. Schon once more vowed to resign. Yet somehow, this dysfunctional crew rallied to win the World Cup.

But even after that, several players walked out of the celebration banquet after being informed that their wives weren’t welcome. So appalled was striker Gerd Muller, whose goal beat Holland in the final earlier that day, that he quit the international scene immediately.

“I think it’s fair to say that the players’ minds were not fully on the job in hand,” admitted a dejected Otto Pfister after seeing his Togo team lose all three group matches at their inaugural World Cup. After qualifying, Togo players – headed by Arsenal striker Emmanuel Adebayor – threatened to withdraw from the tournament unless the Togo FA finally paid them the $40,000 bonuses they earned by qualifying.

They relented and played their inaugural match, losing to South Korea, after which Pfister apparently resigned – only to take his place in the dugout for the match against Switzerland. After journalists asked him what he made of captain Jean-Paul Abalo’s ongoing threat to strike, Pfister harrumphed: “You must ask the Togo Football Federation these questions, not me. I do my job, I coach football." If only it had been that easy.

Despite Ally McLeod’s optimism that his side might return “with a medal” from Argentina, the squad’s morale quickly deteriorated as arguments over bonuses, poor hotel facilities and boredom (the squad took to flicking pebbles at a colony of leafcutter ants to dislodge food from their jaws) grew.

Then there were the awful results (a 3-1 loss to Peru and a 1-1 draw with Iran), and winger Willie Johnston being sent home after testing positive for the banned substance Reactivan, a medication prescribed for hay fever. The Scots rallied to beat eventual finalists Holland 3-2, but by then the players couldn’t wait to fly home and put, as forward Lou Macari described it: “A month of madness behind us.”

Perhaps France’s World Cup campaign was always fated to be mired in controversy, after Thierry Henry’s infamous unpunished double handball against Ireland in the play-off enabled William Gallas to tap in the winner. From that moment on, France’s ageing and surly crew of Henry, Gallas and Patrice Evra turned on their astrology-loving coach Raymond Domenech. And that was before the squad even reached South Africa.

The French bombed completely on the pitch, and Anelka was sent home after telling Domenech at half-time during the clash with Mexico to: “Go f**k yourself, you son of a w**re.” Evra clashed with the kit man and the squad refused to train, while Gallas raised his middle finger to journalists. After picking up one point in three games and finishing bottom of Group A, French Prime Minister Nicolas Sarkozy castigated the team – which was forced to fly home economy class – as being unworthy to represent France.

It was the ultimate basket case of a World Cup squad, with a number of reputations sullied and in some cases utterly destroyed.

Cameroon’s World Cup squad refused to board the plane due to take them to Brazil because of a long-running dispute over bonus payments for qualifying for the tournament, which they claimed were inadequate. Several stars, including Alex Song and Samuel Eto’o, also refused to attend a function with national team officials prior to departing for the finals unless they received an estimated $61,000 per man.

After agreeing an end to the row, Cameroon Football Federation president Joseph Owona said: "Everything has been resolved. We have opted for transparency. There is no problem and I think the team needs to be mobilised for all to look in one direction." That wasn’t exactly how things turned out, and Cameroon were turfed out in the group stage, conceding four goals against both Brazil and Croatia.

Benoit Assou-Ekotto nutted team-mate Benjamin Moukandjo in the latter, wailing afterwards: "Now people take me for an idiot. I couldn't control my temper. If the score was 0-0, it wouldn't have happened."

Ferruccio Valcareggi’s Italy may have entered the World Cup as one of the favourites, but the truth was that their squad was deeply divided between the new and the old guard, as well as northern and southern players. The uneasy peace was shattered when notoriously combustible striker Giorgio Chinaglia was substituted against Haiti, after missing several gilt-edged chances as Italy fought back to win 3-1.

As he stomped off the pitch, Chinaglia told his manager to “f**k off”, made a hand gesture and ran straight to the dressing room, where he smashed some empty water bottles and a hairdryer. After the team was eliminated by Poland in the final game, Italian emigrants attacked the team bus, and reserve goalkeeper Enrico Albertosi punched a supporter to the ground. It was an ignominious end to Italy’s World Cup.

Ghana coach Kwesi Appiah said he had been having "sleepless nights" over a bonus issue which came to a head when players and team officials had a meeting instead of training before the team’s crunch match with Portugal. A proposed strike by Ghanaian players was only averted thanks to the personal intervention of president John Dramani Mahama, and around $3m in cash was flown to Brazil to pay the furious players.

After the World Cup, the (now) former coach Appiah later revealed that some of his players kept their $100,000 share in their backpacks in the dressing room while they played their Group G game against Portugal in Brasilia. “It’s not all about the football in the modern era,” he ruefully admitted.

The Salvadorans were the last of the 24 teams to get to Spain, arriving after an exhausting 72-hour journey just three days before their infamous 10-1 defeat against Hungary. Goalkeeper Ricardo Mora recalled: "The bags and kit FIFA gave us were old - most bared the 1974 World Cup logo. It was shameful." Coach Mauricio Rodriguez tried to bring on a substitute goalkeeper after the Hungarians scored a four, but the Salvadoran back-up refused.

After the heavy defeat, in which El Salvador had attacked relentlessly in suicidal fashion, skipper Norberto Huezo launched a coup against the coach, informing the team: “From now on, the coach decides nothing. We will decide our tactics.” And they were far better, even man-marking Diego Maradona effectively during a respectable 2-0 loss to Argentina.

Mauricio Rodriguez never coached again, and many of the players – who blamed the coach for the Hungary debacle and never spoke to him again – discovered their free passes to matches in El Salvador had been revoked during the following season.