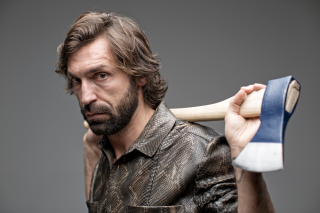 This feature first appeared in the August 2019 issue of FourFourTwo. Subscribe now to get free headphones worth £49.99

Perhaps you haven’t heard of Baldassare Castiglione. He was a 16th-century count – and, judging by his portrait, not a particularly handsome one. Visitors to the Louvre will have seen it because Castiglione just so happened to be a good friend of Raphael, the Renaissance master, who considered him a sufficiently interesting subject to paint. It was quite the compliment; the 1510s equivalent of having Rankin or Davide Sorrenti take your picture.

Castiglione sits, hands clasped, staring at you with those piercing blue eyes of his. Look beyond and you notice that the curtains don’t match the rug: his eyebrows are blond, his beard a chestnut hue. The outfit is apparently that year’s winter season – a cross between a beret and a turban with a squirrel-fur doublet, presumably the must-have accessory for any self-respecting fashionista spotted in Mantua and other courtly circles at the time.

Castiglione fascinated Raphael not only due to his peculiar appearance and penchant for leftfield animal pelts, but because after reading The Book of the Courtier – the Renaissance’s own version of The Gentleman’s Handbook or The Rake – he thought of Castiglione as a trendsetter and influencer, especially in what to wear, how to act and where to be seen.

The legacy of Castiglione’s guide, which is still in print to this day, can be summed up in one word: sprezzatura.

Pro tip: you can achieve sprezzatura in 2019 just by dropping it into conversation. Some have translated it as ‘nonchalance’ – however, after years spent living under Napoleonic rule, the Italians aren’t going to allow the French to define it for them. It means “studied carelessness”; in other words, the art of performing a difficult task so gracefully that it looks effortless.

In @JamesHorncastle’s @FourFourTwo cover feature on Andrea Pirlo, he writes brilliantly about Raphael’s portrait of Baldassare Castiglione. Today I went to see it, and you know what? It’s pretty good. pic.twitter.com/APhlI9UAg7July 29, 2019

If you had to think of a modern-day archetype, a compatriot of Castiglione’s immediately comes to mind. About an hour’s drive north of the count’s ancestral home in Casatico is the Lombard city of Brescia. Flashing forward to the early 1990s, picture a mother looking at her watch, admonishing her son under her breath, fearful he is going to make her late again. A young Andrea Pirlo is in his room, flicking through his wardrobe.

“I used to spend hours in front of the mirror, fixing my quiff, my shirt collar, the creases in my polo shirt, the hem of my trousers,” he recalled. “Mamma would shout, ‘Andrea, stop looking at yourself! Enough!’”

To some, this may resemble a Narcissus complex, but Pirlo was merely putting in his Gladwellian 10,000 hours in order to achieve the elusive vibe that is sprezzatura. He mastered it in much the same way that he nailed the Juninho Pernambucano free-kick, before later putting his own twist on it and coming up with la Maledetta.

Time in front of his reflection was not time misspent. Take Pirlo’s long, flowing locks as an example. They are by no means immaculate. Contrast this with, for instance, the order and precision of the unchanging cut Javier Zanetti sported in each Panini sticker chronicling his long career. There isn’t a hair out of place. Each follicle is combed into position. No amount of running up and down the flank, no sudden deluge, will precipitate a shift. Pirlo, on the other hand, can look as if he just got out of bed. Rogue strands dangle in his eyeline. The ends sometimes appear split. But its in these little imperfections that Pirlo finds perfection.

On the surface, there is none of the effort that David Beckham made as he flipped on an almost weekly basis from curtains and zero fades to mohicans and bleaching blond. Maybe this is where the illusion lies with Pirlo; a swan gliding gracefully across the water while his feet paddle furiously beneath the surface. Sprezzatura at its finest.

Retrospecting on his generation in football, you probably wouldn’t say he was the most classically handsome. It’s not as if every personal appearance elicited the deafening scream synonymous with Beatlemania. Fashion designers picked other players to walk the runway. Aside from his appearance in the legendary D&G advert with the World Cup-winning Italy side of 2006, Pirlo didn’t stop traffic in his Y-fronts quite like Freddie Ljungberg or Hidetoshi Nakata.

Looking back at the Milan side in which Pirlo starred – a side that doubled as the portfolio of a model agency when it wasn’t winning Champions League finals – the face Giorgio Armani regularly chose for his major campaigns was that of Andriy Shevchenko and his chiselled cheekbones, to say nothing of Kaka, everybody’s favourite boy-next-door. But, as Armani himself said, “elegance is not standing out but being remembered”.

Trends are what Pirlo resists. You won’t see him in the Balenciaga shoes that look like socks. He isn’t interested in Fendi partnering with Fila for some momentary sports lux collaboration. You’re not going to catch him wearing the latest Yeezys or Off-White x Converse. The fad for over-sized T-Shirts and hoodies probably offends someone who knows his waist, collar and inside leg measurements like the PIN of his credit card. To quote Karl Lagerfeld: “Trendy is the last stage before tacky.”

Pirlo favours the understated and the timeless. His rise coincided with that of the Slow Movement in Italy, which sought to counteract the disappearance of local cultures not only in food but in craft. In an age of mass production, quick releases and homogenised output, the Slow Movement encouraged producers to take their foot off the accelerator and place the emphasis back on quality with more time for thought, care and precision.

The sleight of hand in modernity is in persuading everyone that new is better, when in fact nothing was wrong with the ways of old. Take nonna’s method of making tortellini. She might be in the kitchen all day, but in the end the taste would be Proustian in its impact. Consider the atelier in the piazza. He might need a fortnight to cut and line the suit he is making for you, down to the last millimetre, but it will last as long as your figure respects its measurements. The theory is: these things are worth the wait because they are timeless.

It’s a bit like Pirlo’s role on the pitch. Many thought the regista was a relic consigned to the past. Nobody could play football as if sat in a director’s chair and Pasolini their way through a game. It had become too high in velocity, too intense. But Pirlo still found time and he never failed to discover space. The surrounding blur and rush did not disrupt his tempo, nor impair his vision. Slow succeeded in a fast environment thanks to the genius flashing behind his eyes. He dresses as he played, achieving class in the smart and the casual. The nicknames he inspired over the course of his playing career, il Maestro and l’Architetto, capture Pirlo’s appreciation for composition, design and set-pieces. He wouldn’t look out of place beside Renzo Piano at the opening of a new building, or next to Toni Servillo in the latest Paolo Sorrentino film.

And that alludes to something else, because there’s more to Pirlo than the unstructured blazers, the open shirts, the turtle necks and the suede monkstraps. It’s a mood.

He has this inscrutable poker face that’s often as hard to read as one of his passes. When he speaks, it’s in a monotone Brescian drawl, which would indicate a low resting heart rate. The impression given is of someone who is aloof and unflappable. The effect is the generation of a certain sphinx-like mystique.

But how does that square with the Pirlo you read about in his book, I Think Therefore I Play? The playful practical joker. The guy capable of bringing the house down with a one-liner. Talk to his team-mates and that is unmistakably Pirlo. If there were a Rat Pack in football he would be the Dean Martin figure, releasing hit singles one minute and telling belly-laughing gags the next.

The Ocean’s Eleven comparisons continue with Pirlo investing in wine where George Clooney has dabbled in tequila. The picture of Pirlo, sat among the vines, one leg over the other, a glass of Arduo perched on his knee, has gone a long way in consolidating the image of the 40-year-old as an icon of refined taste.

The beard did the rest. You might say that growing it was as transformative a moment as when Carlo Mazzone decided that a player of Pirlo’s talent was better served in front of Brescia’s defence than behind their strikers. Pirlo cultivated the best beard in football when the beard was king.

Just as his reverse pass for Fabio Grosso in the 2006 World Cup semi-final acted as one of the decisive moments in Pirlo becoming a legend of the game, the pairing of that beard with that haircut at that time gave him a gravitas that dovetailed so sublimely with his playing style, it allowed him to transcend his sport. Humiliating Joe Hart with a Panenka in the penalty shootout that decided Italy’s 2012 European Championship quarter-final with England was the coolest way for the coolest guy to eliminate the hottest head in a major tournament. Mortal Kombat’s Sub-Zero couldn’t have come up with a colder finishing move.

MEMES AND MISTAKES Why isn’t Joe Hart remembered as being as good as he was?

Pirlo’s legacy, then, comes in forcing us through style to reconsider the identity foisted upon on one of the world’s great football cultures, or at the very least the stereotypes that define it. Casual fans will tell you that the Italian game is boring. Negative. Destructive. A buzzkill. Gianni Brera, the columnist and ideologue who promoted catenaccio, insisted it had to be that way because for centuries the country had needed to defend, resist and suffer foreign invasion.

Ask yourself honestly, though: is that what instantly sparks to mind when you think about Italy in general? Or is it beauty; a sense of invention; the fine line between elegance and excess, rich creativity and decadence? This is Italy, too. The curves of a Ferrari 250 GT. The punch of an Olivetti Lettera. The body of a Super Tuscan. The look of Andrea Pirlo, and the art of what Baldassare Castiglione called Sprezzatura.