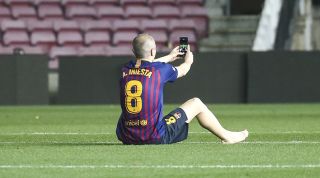 The 34-year-old, who came through the ranks at Barcelona and made his debut in 2002, announced earlier in the season that he would be leaving the La Liga champions after winning 19 major titles in 16 years.

He left the pitch to a standing ovation in the 81st minute of Barça's 1-0 win over Real Sociedad, which was the last game of the 2017/18 La Liga campaign. Iniesta was applauded off the pitch by everyone inside the stadium (like, obviously), and was visibly emotional afterwards.

Once Barcelona had been handed the La Liga trophy and the team revelled in their celebrations, Iniesta had a quiet moment to himself on the pitch... at 1am.

He said in his farewell speech: "My time at Barça ends here because I know how demanding the club is and what it means to be captain of the best team in the world. I wanted to be honest with myself and the club.

"It's difficult to say goodbye to what has been my home and life, but I’d never forgive myself if I stayed here without being fully up to it physically or mentally.

"It was never easy to leave my family when I was just 12. It was a hard journey, but all that sacrifice was worth it because my dream of being a success at Barça came true."

Iniesta hasn't yet decided on his next club, amid reported interest from suitors in China and Japan. In the meantime, his attention focuses on the World Cup with Spain – his fourth such tournament with La Roja.