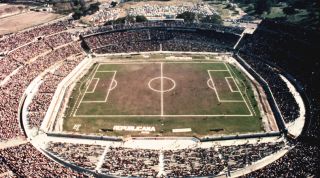 The most famous meeting between Argentina and Uruguay remains the final of the inaugural World Cup in 1930. In Montevideo, in front of 70,000 supporters, Uruguay reversed a 2-1 half-time deficit to win the game 4-2, lifting what would later, in 1946, become known as the Jules Rimet trophy.

It was an occasion full of sub-plots and characters. Belgian referee Jean Langenus officiated ‘skilfully’ according to FIFA’s official history, and was ‘unfazed by the masses’ as he controlled the game in his cap and baggy trousers. One of his assistants, Ulises Saucedo, had actually coached Bolivia through the tournament alongside his own refereeing duties, before finding the time to run the line in the final.

On the pitch, Luis Monti – the chunky, square-jawed midfielder and future Juventus icon – was playing in the first of two finals. He’d represent a different country in each but played under threat of death in both. In 1930 from Uruguayan fans, keen to see the Argentinians defeated. In 1934 from Benito Mussolini, who saw in Monti’s adopted Italian side the perfect vehicle for his noxious fascism and was 'keen' to see them victorious.

The anecdotes from 1930 are secondary to that game’s singular truth, though: Uruguay were the sport’s first world champions and the rivalry between the two countries had its first really significant waypoint. But not its first history. Nor the first moment which would leave a lasting impact on the game.

While the sport had had to wait until 1930 for its first truly international tournament, football had an Olympic past which dated back to 1900. The first two competitions were hardly global. Three teams competed and the matches were contested between clubs representing their nation, rather than by players drawn from a national pool. Upton Park FC, under the banner of Great Britain, took gold in 1900, while Canada’s Galt FC finished top of the podium four years later.

18 football books to keep you busy during isolation

By 1924, three teams had risen to 12 and the tournament was a much broader affair. The game remained at different stages of evolution (and professionalism) around the world, though, and the first round in Paris captured those disparities: of the six matches played, half were decided by margins of five goals or more. Hungary gave Poland a 5-0 whipping, Uruguay trampled Yugoslavia 7-0, and Switzerland humbled Lithuania with nine unanswered goals.

The Uruguayans would triumph. They began with that demolition of the Yugoslavs, with an audience of just 1,000 spectators, knocked out the United States, France and Holland, and then defeated the Swiss 3-0 in the final in front of 41,000. In itself it was a remarkable story. The prelude to which involved the South Americans travelling to Europe in spartan third-class conditions, taking a day-long train journey from Spain to France, and having to pay for the trip by playing nine different friendlies against Spanish club sides.

At first, Uruguay’s success was embraced in their home continent. They had won their Olympic gold with an evolved style of play and their superiority reflected well on Argentina, too, whose game was built upon shared tenets of expression, fluidity and flair, and which had by that time forked away from English fundamentalism.

Argentina hadn’t competed in 1924. In fact, in six of the previous seven South American championships, they’d finished behind Uruguay on points. Nevertheless, the native assumption became that had they travelled to the Olympics, they and not the Uruguayans would have taken home the gold. It’s the kind of reductive argument that supporters are still blindly making today, but then – in 1924 – it created the conditions for a friendly: Argentina against Uruguay over two legs.

As Jonathan Wilson notes in his superb Angels with Dirty Faces, Uruguay’s motivation for accepting the challenge was likely financial. They were Olympic champions and a big public draw. Argentina saw it as an opportunity to unofficially prise away their title - to loosen a few fingers and create some doubt.

The tie itself was too controversial to carry proper weight; it was marred by violence off the field and roughhousing on it, and resulted in a dramatic deterioration in inter-country relations. The two sides drew 1-1 in Montevideo and, a fortnight later on October 2 and after a rescheduling because crowd trouble, Argentina won the second leg 2-1 – albeit after the match had been abandoned with four minutes left to play.

Argentina had seen a strong penalty appeal turned down and, in their irritation, the crowd had pelted the pitch with stones. At first the Uruguayan players returned fire with interest. Then, perhaps thinking better of it, they left the field for good, with their opponents awarded the win and an aggregate victory.

It was a messy and fractious encounter. As a result, it’s a game which has a tenuous place in history. Its first goal has endured, though.

It was el gol olimpico. The Olympic goal.

Following the IFAB rule change of June 1924, Huracan’s Cesareo Onzari became the first player to legally score directly from a corner, beating goalkeeper Antonio Mazzali at the near post. It wasn’t the moment which settled the tie, but the terminology has stuck in South America ever since and has remained in the game’s wider vernacular for almost a century. For an excellent and expansive history of goals scored directly from corners, The Athletic's Jack Lang wrote a fine article last year.

It's a reference point which has never really embedded itself in European football culture. Certainly not in England, where goals from corners conjure images of flapping goalkeepers, heavy rain, and gusting winds. Of northern towns and dark skies, essentially. An Olympic goal? More like a Pulis Special.

In Argentina and beyond, though, it has a romantic sort of permanence. Initially, that was probably drawn from the attempt to bestow gravitas on a game which carried no real significance (and had no connection whatsoever to the Olympics), but it has still survived through the decades and remains in use within the game's Spanish and Portuguese-speaking communities.