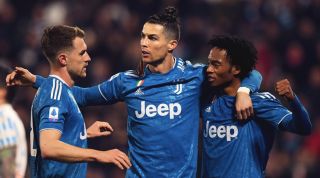 Twelve minutes on the clock, 96 to guess.

NOW TRY Quiz! Can you name every club to reach a Champions League or European Cup final?

Most of us just watch one regularly, revel in the nostalgia of another, check out one big fixture of another one, and know a handful of obscure players from the other two, solely from Football Manager.

But if push comes to shove, how many sides can you name from England, France, Germany, Italy and Spain's top divisions?

Sure, there are the few from the Champions League. There are those you remember from the Europa, and though that have been in Europe in the last few years. But what about those ones that yo-yo between the second and first divisions in their countries? The perennial midtable, out-in-the-sticks sides that last graced our shores for preseason friendlies against League One sides, ten years ago?

One Premier League team could drop out of this list this weekend - so let's see how you do with this list first...