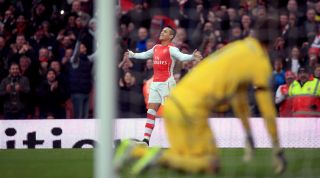 Arsenal strolled to a comfortable win over Stoke, leapfrogging north London rivals Tottenham, with Alexis Sanchez the undisputed star of the show.

Sanchez then bagged one for himself, exchanging passes with Santi Cazorla, before firing the ball in at Begovic's near post. He made it three with a deflected free-kick early in the second half, as Arsenal coasted to a much-needed three points. Stoke rarely threatened, mustering just two shots on target.

Analyse this match with Stats Zone