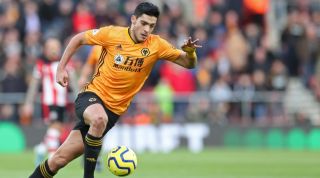 Sky invented football in 1992, as we all know. Before that they probably played football with a potato, you got a yellow card for suplexing a prone opponent and there weren’t even any gambling sponsors on shirts. Was it even real football?

We jest, of course – the history of England’s top division stretches far back before 1992/93. Yet the rechristened Premier League is a neat starting point for the modern game and these are the prolific players who’ve made their mark for each current club. Such as these heroes.

Raul Jimenez became Wolverhampton Wanderers' top Premier League scorer this weekend, after netting a brace against Southampton. But who else makes the cut?

The players with an asterisk are still playing for the club and (potentially) adding to their total, while those without are long gone. But their goals are seared into your memory (hopefully).

The top three scorers in league goals for each current Prem club are below, along with a player’s national side. Ten minutes are on the clock, and we’d love to know how you get on @FourFourTwo – we’ll retweet the best scores, if you don’t give answers away. Then challenge some friends while you’re at it...

*Still playing for this club

QUIZ! How many scorers from the last 20 seasons of Manchester United vs Liverpool games can you name?

While you're here, why not take advantage of our brilliant subscribers' offer? Get the game's greatest stories and finest journalism direct to your door for less than £3.50 an issue. Cheers!