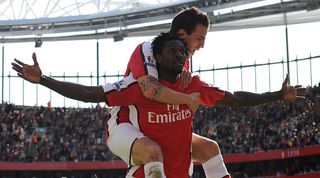 The 2008/2009 season didnāt start well for Arsenal but by the beginning of April, they were comfortably fourth, in the semi-finals of the FA Cup where they would faceĀ Chelsea, and would go on to defeat Villarreal 4-1 on aggregate to set up a Champions League semi-final against Manchester United.

Things looked bright at the time, until they didnāt. Arsenal exited the FA Cup withĀ a 2-1 loss to the Blues,Ā with Arsene Wenger bewilderingly deciding not to start the red-hot Andrei Arshavin.

A few weeks later, they needed to overturn a 1-0 deficit at home against United in the second leg of their Champions LeagueĀ tie. It was the biggest game of the season and the atmosphere was rocking at the Emirates before kick-off.

However, an early slip from a young Kieran Gibbs allowedĀ Park Ji-sung to score a crucial away goal, which virtually killed the tie and deflated the home crowd as it ended 4-1 on aggregate to the visitors. Arsenal still finished fourth, but the season could've been much more.

This was a special season, in that Arsenal finally brought in a big-money signing in Mesut Ozil and in the process, ended their long trophy drought with the FA Cup.

However, it really should've been a first league title since 2004 as well. Arsenal led the pack for the majority of the season and played some electric football while doing so.

But the usual February to March collapse occurred where a tough run of fixtures saw the Gunners suffer some big defeats to their rivals and collect just nine points out of a possible 24. In the end, that proved fatal as they eventually finished fourth - seven points behind the eventual winners Manchester City.

Of all the seasons in the Emirates era where Arsenal *really*Ā should've won the league title, it was this one.

Can Antoine Griezmann ever thrive in Lionel Messi's Barcelona?

Ozil and Alexis Sanchez were on fire, with the former looking likely to break the single season league assist record, defending champions Chelsea were imploding, United and City had poor seasons and Liverpool were in transition. Surely the Gunners would end their league drought?

Leicester City were defying the odds sitting at the top of the table, but when Arsenal scored a last-minute winner through Danny Welbeck in a 2-1 win over them in February, it put them two points behind in second and blew the title race wide open.

It felt like a season-defining moment. However, Arsenal would lose their next two league games, while the Foxes would remain undefeated for the rest of the season to claim a historic first-ever league title as they eventually finished 10 points above Wengerās men.

At one point, Arsenal looked unbeatable and on course to potentially challenging for all four trophies. By mid-February, they were just one point behind United in second, in the finalĀ of the Carling Cup, had defeated Pep Guardiolaās Barcelona 2-1 in the first leg of their Champions League round of 16 tie and were still in the FA Cup.

They were without Cesc Fabregas and Theo Walcott for the Carling Cup final against Birmingham City, but it was expected to be a formality nonetheless. However, a mixup between Wojciech Szczesny and Laurent Koscielny allowed Obafemi Martins to score an injury time winner to lead the Blues to a 2-1 victory.

It was a devastating defeat which had a huge impact on the rest of the season. The Gunners would later win just two of their next 11 league games, lose 3-1 to Barca in the second leg and crash out of the FA Cup sixth round to United. By the end of the campaign, they ended up in fourth place, finishing 12 points behind Sir Alex Fergusonās men.

This season will undoubtedly go down as the most painful one. Arsenal had lost Thierry Henry in the summer, but that didnāt seem to matter as the young Gunners, led by the in-form Fabregas and Emmanuel Adebayor, were rampant and led the table for majority of the season.

They lost just once in their first 26 league games and were playing football the Invincibles would've been proud of. By February, they had a five-point lead over Manchester United with just 12 games remaining.

But when Eduardo Da Silva broke his leg against Birmingham City after a horror tackle from Martin Taylor, there was a mental turning point. The Gunners would end up drawing that game 2-2 in the final minutes and later drew their next three league games before suffering defeat against Chelsea and United to end their title hopes.

By the end, they finished four agonising points behind eventual champions United in third place. They would also cruelly exit the Champions League quarter-finals 5-3 on aggregate after a late defeat to Liverpool, which saw them concede a controversial penalty right after grabbing the crucial away goal that would have seen them through.

While you're here, why not take advantage of our brilliant subscribers' offer? Get the game's greatest stories and best journalism direct to your door forĀ only Ā£9.50 every quarter. Cheers!

COMMENTĀ Robert Lewandowskiās goalscoring record this season is beyond ridiculous

GUIDEĀ Premier League live stream best VPN: how to watch every game from anywhere in the world