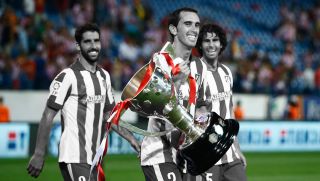 A bit of an exclusive news flash for all the readers who may have become as confused as those clueless, corporate lackey bozos who chose the prize winners for the Spanish League (LFP) 2013/14 awards.

Atlético Madrid won La Liga. Yes, it sounds completely mad but it happened, no matter how much it probably upset Florentino Pérez along the way.

The Real Madrid president is being seen as the dark hand behind the sham of Monday night which did not see a single player from Atlético picking up a gong.

All without proof of course, but that is never a problem when it comes to juicy conspiracies in La Liga. After all, who wants to see an obscure fella called Jorge Resurrección Merodio climbing up onto the stage when Cristiano Ronaldo looks so much shinier.

Naturally, the Real Madrid man was the biggest recipient of the night, picking up three prizes to celebrate not winning the league, nor being the best footballer of the year either. That didn’t stop him grabbing the gongs for best player, best striker and best goal, though, and claiming that “the prizes are fair.”

The enormous joke that were the LFP awards continued in the same tone with Sergio Ramos winning best defender. Just hold that thought for a moment as there is better to come.

Luka Modric was the best defensive midfielder apparently, while Andrés Iniesta ended up winning the best attacking midfielder award. All players that failed to win the league, something that might have been relevant in the decision-making process.

The breakthrough footballer of the year was Rafinha - now back at Barcelona after a loan spell at Celta Vigo - and Keylor Navas (now Real Madrid) won best keeper. Basically, any footballer that is not currently affiliated with the Big Two was excluded.

“Atlético Madrid fans are used to being upset,” wrote a sympathetic Alfredo Relaño in AS, bemoaning the fact that the voting is done in secret.

Probed after the event on the rather surprising (or unsurprising) turnout of events and Atlético Madrid president Enrique Cerezo did say that “I don’t think Florentino has anything to do with this.”

However, the Atlético man did point out that Thibaut Courtois, Diego Godín and Miranda were rather important figures for the Rojiblancos last year. Along with Koke and even plucky Diego Costa.

In LLL’s world, Cerezo should have been absolutely hopping mad about the event which ended up being a sort of sci-fi episode of La Liga with Atlético’s achievements being wiped from the timeline. But the Rojiblancos boss is now just like every fan. Used to being ignored, disrespected and completely forgotten.