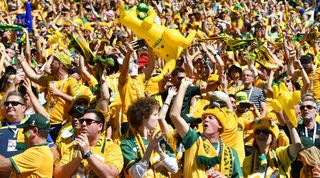 Australia may have lost 2-1 to France in their opening World Cup match on Saturday afternoon, but that didn't stop 15,000 of their fans taking over Kazan's city centre that night.

The Socceroos' game was the first of four that took place on Saturday, meaning lots of time for supporters to settle in for an evening of World Cup fun.

Baumana street in central Kazan, a popular tourist spot, hosted plenty of Australians partying long into the night. One bar ended up with four empty beer taps, while another was drained of 450 litres.

Evgeny, the head bartender of Gudini Bar, told the Sydney Morning Herald: "Australian guys are like Russians; we are the same because we are drinking too much. In the morning, we didn't have any beer in the pub. All the beer was drunk.

"It was so busy, it was so much fun because a lot of Australian people came into our pub and drank all night. I don’t know exactly how many glasses of beer I poured last night but I think it was one million.

"I slept just only three hours. After I woke up I went to a beer shop and bought 450 litres of beer for Australian guys because I don’t know how many Australian guys come."

Republica bartender Aliya said: "It was a special night. They drank all the beer, we finished it. They watch the football and just drink beer. I don't know why."