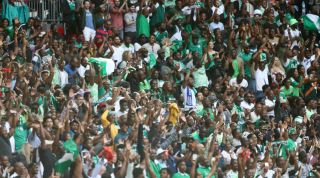 The act of bringing a live chicken to a game is generally considered a sign of good fortune in Nigeria, but fans caught with them won't be allowed into the Kaliningrad Stadium when the Super Eagles take on Croatia in their opening Group D game on Saturday evening.

"Fans from Nigeria asked if it's possible to go to the stadium with a chicken, it's their symbol. We told them bringing a live chicken is not possible," Andrei Ermak, minister of culture in Kaliningrad, told Russia's Interfax news agency.

However, Ermak has supported the Nigeria fans' search for a chicken should they wish to buy and carry one elsewhere.

He added: "We will, of course, advise them where a chicken can be bought. We are ready to satisfy even the most eccentric inquiries."

Eight years ago in South Africa, Nigeria fans were denied entry into Ellis Park stadium after refusing to abandon their poultry ahead of a 1-0 loss against Argentina.

After this evening's game, Nigeria will have played Argentina in five of their six World Cups since 1994 (the exception was France '98).