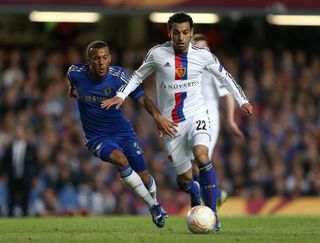 Chelsea should have few problems against FC Basel, the side they defeated at the semi-final stage of last season's Europa League.

The Swiss champions have started their season in decent form, recording three wins and three draws from their opening seven matches. And with Schalke looking vulnerable at the back, Murat Yakin might fancy his side’s chances of qualification from this group alongside tonight’s opponents.

Basel are likely to play a cautious, defensive game at Stamford Bridge – but they certainly have talented individuals who can make the difference.

A key man will be holding midfielder Fabian Frei, one of the more talented members of the Switzerland side that reached the European U21 final a couple of years ago.

Frei is a reliable and unfussy midfielder that distributes the ball calmly from central positions, and leaves the attacking to more creative players. But he tends to dominate the passing – he completed more than any other player in Basel’s home defeat to Chelsea last season, and Jose Mourinho might instruct Oscar to pressure him in the early stages.

Another key man is centre-forward and captain Marco Streller – a familiar face, and something of a veteran at 32. Never the most mobile striker even in his younger days, Streller plays a static role up front and rarely moves outside the width of the penalty box.

At 6ft 5in, however, the giant striker remains a considerable threat in the air. His performance in the Europa League win over Dnipro last season was particularly stereotypical – he won the majority of his aerial duels, and scored from his only attempt which was, inevitably, a header.

Chelsea may also want to watch out for Egyptian winger Mohamed Salah, a tricky player capable of playing on either flank, although he’s generally started on the right this season.

Salah is a typically inconsistent young winger who loses the ball far too frequently, but the 21-year-old is certainly capable of coming up with a vital goal or assist. He might not start at Stamford Bridge as Yakin attempts to keep things tight, but his substitute appearance against Sporting Lisbon last year shows his quality – he created five chances, and two goals, in less than half an hour.