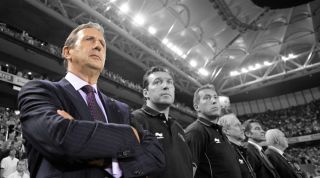 As Belgium’s players trudged off the pitch following a 3-1 defeat to Germany at the Esprit Arena in Dusseldorf in October 2011, there was no clamour to claim ownership of a side who had lost three out of 10 qualification matches and failed to even reach the play-offs for Euro 2012.

Fast-forward two years, and it’s a very different story. Belgium’s victory in Zagreb on Friday night sent the Red Devils through to their first major tournament since 2002. It also maintained the unbeaten record of a side that will gallop to Brazil next summer as one of the dark horses for the competition.

Watching on from the comfort of his sofa – with a Stella or two close at hand, FourFourTwo likes to think – was Georges Leekens, predecessor of currently fêted national team boss Marc Wilmots.

After walking away from his position in May 2012 in order to take the manager’s job at Club Brugge, Leekens could have been forgiven for wondering where it all went wrong. Particularly when you bear in mind that he was given the elbow by the Jupiler League side after just seven months.

When FFT catches up with the amiable and endlessly enthusiastic 64-year-old, it’s clear, though, that Leekens is taking as much pleasure from Belgium’s glorious re-birth as everyone else in the country.

That said, not everyone agrees with his recent assertion – published on his personal website – that he is the “builder of probably the best A-national team” the country has ever seen. That claim left Red Devils fans choking on their moules et frites. Leekens, however, is unapologetic, believing that the experience gained by the young stars he introduced to a side that hadn’t had so much of a sniff of either a World Cup or European Championship since the 2002 was instrumental in their dramatic uptick in fortunes.

“They’ve started to believe in themselves but for a long time this group have suffered because they had no results. They had a lot of critics because although they were playing nice football, beautiful football, there was no efficiency.

“In the end the public have started to believe in the young boys – I always believed in them.”

At the risk of repetition, it’s hard to believe that a crop which has waltzed through Group A in the same easy manner that Diego Maradona dribbled through Belgium’s defence in the Mexico 86 semi-finals didn’t have the self-belief to make it to last summer’s European Championship.

As it was, Belgium’s galaxy of young stars spent last summer on the beach, although presumably they also took the time to watch Roy Hodgson’s England dispel the myth that you need more of the ball than the opposition to win a game of football.

By this time, of course, Leekens was planning for his latest challenge in club football and his former assistant Wilmots was furiously beavering on a blueprint that would turn Belgium from wasters to world-beaters.

The former manager, though, believes that groundwork that would ultimately see Belgium sail through Group A had already been done.

“Germany and Turkey finished before us [in Euro 2012 qualifying] and we had a lot of critics saying ‘Why?', 'What did we do wrong? and 'What do we have to do to get to Brazil?’,” says Leekens.

“We asked the players too, we were very self-critical, asking the players what we needed to do to put everything right. The players were very open, they said we needed to cut out the little mistakes, such as the penalty against Turkey. They said that, at times, we liked too much nice football but that talent was not enough.

“Now we have a fantastic goalkeeper, world-class defenders, a fantastic midfield, and forwards that can score goals. They’re turning into adults, these guys have grown up, they like to play for Belgium and they have a good team spirit.”

Despite the damp squib of last night's draw in Brussels against Wales, it has been a campaign to remember for Wilmots’ men and they will certainly be one of the teams to avoid in the World Cup draw.

But while Wilmots plots a course through the group stages of the country’s first World Cup in 12 years, the debate about whose team this really is still rages.

“Wilmots is the right man in the right place,” said Leekens. “He's the one who helped Belgium quality for the World Cup, not me. But I did – along with my predecessor, Dick Advocaat – make the Belgian FA more professional. I helped create a framework that makes today’s performances possible. I see myself as an architect but an architect doesn’t build the house. I am really proud of Wilmots’, and the Red Devils’, performance.”

No ambiguity there then, and credit where it’s due. But Leekens’ contribution should, in all seriousness, not be overlooked. In fact, now without a job, the man himself believes that England's FA could do worse than pick up the phone and ask him for some advice – or even offer him a job.

“I’ve nothing on at the moment,” he tells FFT. “Of course I would love to help.

“Our players are now getting a lot of opportunity at an early age, not only in our league but in Russia, in Spain, in Holland. I think the FA need to analyse the real problem: there’s no doubt that there’s good players in England but there are things the FA have to do in terms of the tactics that young teams employ. There’s so much opportunity and the money is clearly there.”

While both nations are on their way to Brazil, the immensely likeable Leekens – who speaks at such a rate that it’s like interviewing Roy Hodgson after a few too many Ribenas – will once again be watching from home.

Wilmots, meanwhile, will head to South America knowing that he’s one of the luckiest coaches in world football. After all, it’s not every day you get a Golden Generation that actually looks capable of delivering on its promise. Just ask Sven Göran-Eriksson.