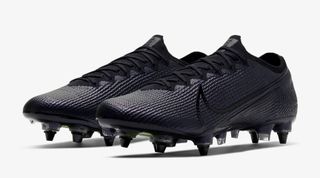 Nike’s list of athletes is astonishing: Kylian Mbappe, Pierre-Emerick Aubameyang and Raheem Sterling all sport the brand’s boots. That’s without touching on the efforts that the company have tailored specifically to Cristiano Ronaldo and Neymar. And that’s just the footballers.

It’s good company to be in. You might not have the explosive impact of Cristiano in your local five-a-side but it’s how a product makes you feel that really matters. Nike’s boots are just that: even from the early days of R9’s iconic silver Mercurial Vapors, they’ve had an ability to transform your local park into the San Siro.

Even now, Nike produces some of the nicest boots you can buy. We’ve moved a long way from the days when all football boots were black, leather and cumbersome - it perhaps contributed to Sir Alex retiring from the game - and there are plenty of options out there for all players, now. Check them all out...

Which are the best Nike boots?

Asking which Nike boots are the best is a bit like asking the best midfielder in the world: it totally depends what you want and ultimately, the answer comes down to preference rather than a tangible measuring stick. You can't realistically compare a Kante to a Thiago, now can you?

But that won’t stop us nailing our colours to the mast. While the Tiempos are nice, the improvement that you’ll feel from some Vapors - particularly the Mercurial Vapor 13 - is astounding. Some boots are comfortable or stylish, but few have the ability that the Vapor 13s have of actually making you feel like you’re quicker and sharper on the field.

It’s well worth the money to go from feeling semi-pro to Sancho in a few short minutes.

The classic Nike boot with a 2020 twist

As players get speedier, the Mercurial Vapors get sleeker, more comfortable, more durable and even able to shed mud as you run. Luckily, us mere mortals only get worse physically, so we notice the benefits of Nike upgrading this legendary product year on year.

The latest editions are utterly magnificent. And available in this sleek shade of black, they appeal to the purists as much as the next generation.

What's the point in being the most expensive footballer alive if you can't stand out?

The Neymar editions of the Vapor 13s are a hell of a lot louder than the regular ones, but maybe that's your style. If you're looking for something bright and colourful - hell, even if you're just a Paris Saint-Germain fan - these are the choice for you.

Who said traditional had to be boring?

When Nike first re-launched the Tiempo range for the growing market of boots in the mid-00s, it was fittingly led by Ronaldinho. Here, was the ultimate tool for touch and control, modelled by a suave, charismatic and skilful Brazilian.

These latest efforts are, arguably, cooler than the ones that Big Ron himself endorsed. They're incredibly comfy, have the feel of a classic boot and the touch is superb.

The perfect balance between speed and control

£133.46
View at Amazon
See all prices (1 found)
Lovely design
Instep is perfect for control
Perfect for passers and finishers
Not the best range of colours

If Lionel Messi were signed to Nike rather than Adidas, the chances are that he'd wear these boots. Of course, he'd probably have his own version, though.

These are the most versatile Nike boots out there. In terms of where they fit in the catalogue, they're an update on the Total 90s that the likes of Rooney and Totti yet to sport, designed for the finesse finisher. They're perfect for those who want a balance between their speed and their ability on the ball: they're versatile boots that the likes of Kevin De Bruyne wears.

The customisable option to suit your look

£44.46
View at Amazon
£47.97
View at Nike UK
£48
View at very.co.uk
See all prices (11 found)
Classic boot
Get it exactly how you want it
There aren't that many colour options
You can't remove the text graphic

Reckon you could cut it as a designer at the Nike factory, churning out PSG and Barcelona kits from your imagination?

We don't, but it's certainly fun to create a boot from scratch on Nike's website. If you're as confident in your colour co-ordinating abilities as you are of your swagger on the pitch, this is definitely the boot for you.