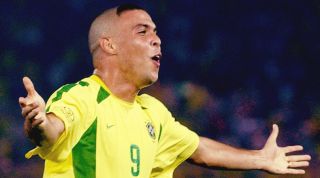 Brazil's national football team has a special place in the heart of football fans of all ages. The blur of golden attacking prowess has been lighting up World Cups since the 1950s

The latest FourFourTwo magazine, which you can order now with free delivery, is a special issue celebrating the Selecao.

Given that Brazil have had some of football's most iconic shirts of all time, we thought we'd have a look at which ones you can get your hands on this week...

Brazil's performance at the 1998 World Cup will be mostly remembered for their capitulation to France in the final.

But it was still a classic side – featuring Ronaldo, Rivaldo, Roberto Carlos, Cafu and Dunga – and they sported one of the greatest Brazil strips ever.

You can grab your hands on this on eBay for as little as £24.99 – and the seller will even customise it with a name and number for you.

We call this side the "greatest ever losers" in the latest issue, and the kit wasn't bad either.

With a wild lockdown barnet and unkempt facial hair, you'll cut a dashing Socrates-esque figure as you dart through your local park in this number.

Available from Toffs, it comes in all sizes and can be customised for a fiver – just in case you want the No.8 on the back to finish off the look.

Coming outside of the World Cup years, and not coinciding with a Copa America win, this top from the early '90s is perhaps less celebrated than others on this – but that only serves to work in its favour.

This period's Umbro shirts are going through a resurgence in popularity at the moment, and this is a great example why. The button up collar and pattern design more than make up for the fact no one ever lifted a trophy in one of these.

We're onto the World Cup-winning kits now. This tournament saw a frontline of Ronaldo, Rivaldo and Ronaldinho tear up Japan and South Korea, leaving England's 'golden generation' in a crumpled, ponytailed heap along the way.

Still looking faintly contemporary, this shirt is different enough that it's instantly recognisable from the others. Just don't get the Ronaldo haircut.

Bebeto's baby and Baggio's ballooner: we all love USA 94. And while winning on penalties after a 0-0 draw isn't the most romantically 'Brazil way' of lifting the trophy,  the shirt is still lovely.

This eBay seller has one with 'Romario 11' on the back – but with not long left to bid, you'll need to keep an eye on it.

Saving the best until last. Pele, Carlos Alberto, Rivelino, Jairzinho, Ze Maria – the squad oozed class, and the shirt did too.

This is a timeless classic, to be worn anytime the weather goes above 20C.

RANKED The 10 best football books ever