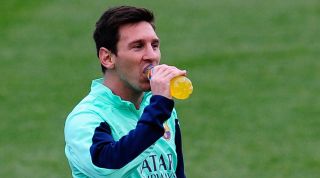 Our good friends at Bet Butler have returned with more vital titbits to help influence your tipping as this weekend's matches approach.

With the Premier League putting its feet up for a few days, this week's preview starts its focus in Spain with Barcelona hosting Elche in La Liga on Sunday.

Champions League-chasing Real Sociedad face off against fellow Basque boys Athletic Bilbao later in the evening, before Juventus and Roma lock horns in Serie A's big game of the weekend.

We'll also give you the lowdown on the sides missing key men and begging to be taken on - featuring Real Valladolid, Osasuna and Inverness Caledonian Thistle.

Barcelona must at least match Atletico Madrid’s result this weekend if they're to top the table when the two sides meet in the next round of fixtures. Lionel Messi is close to a return but likely to be held back for that heavyweight clash - the Catalans will expect to have more than enough to brush aside promoted Elche. The Valencia-based new boys are also missing a key attacker, with Como suspended, and before the winter break they lost three matches in a row while scoring only once.

Barcelona have won all 25 of their home games since the start of last season, excluding against Real Madrid, and 19 of those wins came after leading at half-time, with 12 seeing them more than 1 goal clear at the break. Unsurprisingly, bottom-half promoted teams tend to fare poorly at the Big Two. There have been 21 such matches since 2008/09, and on 17 occasions the Big Two have won by at least 2 goals, while 16 have been W/W doubles and 12 have seen them win both halves. Barcelona’s first-half record is so impressive that backing them on the First Half Asian Handicap -1.0 at 1.70 looks a safe bet.

No team has been involved in fewer matches with 4 or more goals this season than Elche, as Under 3.5 has paid out in 15 of their 17 games. Away to the Big Two is a different challenge, however, and with Barcelona having seen at least 4 strikes in two-thirds of their home games since the start of last season, we’ll leave the goals markets alone.

The Basque derby pits fifth against fourth with both teams in good form and close to fully-fit squads. Real Sociedad did the double over their rivals last season, while the year before it was Athletic who won both meetings. La Real have scored 17 goals in their last 4 home matches, and won 7 of their last 8 games excluding the Big Two, while scoring at least twice every time. Bilbao, meanwhile, have the joint-best five-game form in the league.

Bilbao’s best results have tended to come at home and they’ve lost half of their 8 away matches this season. Moreover, they’ve lost 8 of their last 13 trips to top-half non-Big Two teams, with just 1 win. Sociedad have won 15 of 23 home games since the start of last season when they have scored, which bodes well with Athletic keeping just 1 clean sheet in their last 14 away games. Another home win looks the way to go and Sociedad can be backed at 2.25.

The best bet looks to be in the goals markets, though, as 13 of Sociedad’s last 17 home matches have had at least 3 goals. Furthermore, Bilbao have had just 2 goalless opening halves in their last 24 away matches, and 11 of Sociedad’s 18 home games with first-half goals since 2012/13 have finished with 4 or more strikes. At 1.85 for Over 2.5 Goals there won’t be many better bets this weekend.

Juventus have a 100% home record this season, while Roma are still unbeaten. The champions have won this fixture 4-1 and 4-0 in the last two seasons and their recent form of 9 consecutive wins (with a +22 goal difference) makes them deserved favourites. Moreover, they’ve won 10 of 12 home matches against top-six teams since 2011/12, with 7 wins by at least 2 goals and 5 by 3 or more.

Roma have dropped five points behind Juve after too many recent draws ,and they’ve lost 7 of 9 trips to top-three finishers in the past three seasons, with 6 defeats by more than 1 goal. Juventus are a level above the rest of the league and are worth taking on the Asian Handicap -1.0 at 2.15.

Eight of those 12 Juventus games we’ve already mentioned featured more than 2 goals, while Juve have been 3-0 up at the break in this fixture in each of the last two years. Roma’s scoring dropped off for a while before the break but that coincided with Francesco Totti’s absence, and the club legend is fit to fire the attack once again. Six of Roma’s last 10 trips to top-six sides have had 4 or more goals, so 1.75 looks a good price for Over 2.5 Goals.

We’ve looked around Europe’s major leagues and found the players missing this weekend without whom their teams look set to struggle.

Ebert has a hamstring injury and Valladolid have lost 48% of the 25 games he’s missed since the start of last season. Valladolid have scored fewer than two goals 53% of the time when Ebert has been playing, but that increases to 68% when he’s been missing. Betis are a tempting 3.15 to get their first away win of the season.

Abella has missed 15 games since the start of last season, with Osasuna conceding almost twice as many goals per game as when he’s been playing. This has resulted in 73% of the games he’s missed having Over 2.5 Goals and another ‘overs’ game can be backed at 2.25.

Foran has missed 18 matches since the start of last season and, while Inverness have won just over half the games he’s played, they’ve managed just 3 wins without him as they’ve conceded 36% more goals per game. Motherwell look good value at 2.25.