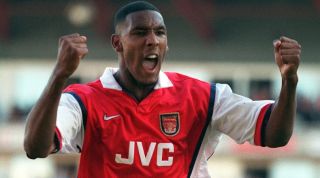 From a financial point of view at least, Nicolas Anelka's two seasons at Highbury arguably make him the best pieces of transfer business Arsenal have ever done. After exploiting a transfer legal loophole, the Gunners nabbed the rangy, raga-haired teenage striker from Paris Saint-Germain for a mere £500,000 at the tail end of the 1996/97 campaign. Two years later, Arsenal vice chairman David Dein sanctioned Anelka's sale to Real Madrid for £23 million; an appreciation of 4,600%.

The hefty sum – reinvested in the club’s new training ground and the signings of Thierry Henry and Davor Suker – went some way towards calming Arsene Wenger’s annoyance at losing one of his international bright young things. But the shockwaves emanating from Anelka’s hugely controversial departure were felt well beyond Highbury’s Art Deco marble halls.

Originally nicknamed ‘Super Nic’ by adoring Arsenal fans, as his goals helped steer the Gunners towards a second domestic Double in 1998, the teenage Anelka seemed to have the world at his feet. Tall, strong and blessed with blistering pace, he was originally signed as cover for the club’s record-chasing striker Ian Wright. Yet Arsene Wenger, coming to the end of his first season in charge at Highbury, knew that Wright’s time was almost up. Once the player had surpassed Cliff Bastin’s goal tally in September 1997, Wright’s form petered out, and injury deprived Arsenal of their record-breaking striker from January onwards.

Anelka, who’d served notice of his huge potential with a coruscating opener at Highbury in a crucial 3-2 win over Manchester United in November, rose to task in the spring. He netted a raft of superlative strikes in the league against Sheffield Wednesday, Newcastle and Blackburn as Arsenal closed in on the league title.

On the pitch, Anelka developed an almost telepathic understanding with Dennis Bergkamp, and it was fitting that after a quicksilver dash into the Newcastle half, his effortless finish past Shay Given in the FA Cup final confirmed that Arsenal had done the Double. “There’s no doubt that Nicolas is a huge talent, and that he has the potential to develop further,” gushed Arsene Wenger at the post-match Wembley press conference. Along with fellow French stars Patrick Vieira and Emmanuel Petit, Anelka looked set to flourish. L’Equipe hailed him as "The new star of French football".

There was just one minor problem. For a young man who had the world at his feet, he seemed to be carrying it on his shoulders. His body language and occasional lack of facial expression hinted at a lack of enjoyment and self-confidence – in marked contrast with Arsenal’s departing talisman Wright, who strutted around the Highbury pitch as if he owned it. There were also rumours that Anelka’s brothers – Claude and Didier – had a great deal of influence over their brother’s career.

Early-season strikes against Manchester United, Everton and Southampton revealed Anelka’s quality in front of goal at the start of 1998/99, but with Bergkamp’s injury and the club opting against signing Patrick Kluivert, the reigning champions looked light up front. His occasional lack of peripheral vision began to grate, and despite Arsenal’s return to form in the new year, plus Anelka’s sparkling displays in wins against West Ham, Chelsea and Leeds, a Mirror headline in February read: 'The gloomy Gooner in Cor Blimey land.' In an exclusive interview, Anelka claimed to being “bored in London”. “I don’t know anybody in London and I don’t want to. I don’t think I’ll see my contract through.”

In another off-the-record chat, he professed to having panic attacks at night. “I had the impression of playing against ghosts. I don’t know whether they are dreams or nightmares.” He also claimed that Dutch pair Marc Overmars and Dennis Bergkamp were conversing only in their native tongue on the pitch, and were shutting him out.

“I live my life how I want to, even though it makes things complicated. The future will show who is right,” he insisted. But such an individualistic approach had little place at Arsenal – a club which valued team togetherness above everything else. With his agent Marc Roger and his brothers (all three Anelkas were holed up in an Edgware flat) pulling the strings and hawking Nicolas around Europe, the Anelka side show was about to become that summer’s main talking point.

Arsenal reported Marseille for tapping up their player, days after the striker had claimed: “They talk about loyalty and love of the shirt. All that is dead.”

Anelka finished the campaign in fine style, despite Arsenal ending the season trophyless. In the weeks that followed, he expressed his desire – at different times – for moves to Lazio, Juventus and finally Real Madrid, whom he claimed were the “club of my heart”. The confused world of Nicolas Anelka – now labelled ‘Le Sulk’ by the English media – was rapidly spiralling out of control.

By late July, the Anelka brothers – attempting to escape Europe’s ravenous paparazzi – hid themselves away in an economy class Martinique hotel; the country where the family originally hailed from. There were no telephones in the rooms, so Claude and Didier called the shots, contacting officials at various European clubs on their mobiles. A week after the family doctor insisted Nicolas was “suffering from stress”, his £23.5 million move to Real Madrid was finally confirmed. “I’m joining the biggest club in Europe,” he argued. “Arsenal are much smaller in comparison.”

Yet Anelka left Real after 12 tortuous months, with coach Vicente del Bosque insisting: “I think he is confused and that he lives in a world of his own.” In the summer of 2000, Anelka returned to PSG for £20 million, but was jettisoned after 18 months after describing coach Luis Fernandes as being “impossible to talk to”.

For Arsenal fans, the chastening truth was that, for all their success at domestic level, the club was simply a stepping stone on the grand European stage for many of their international stars. They would lose Overmars and Petit to Barcelona at the end of the 1999/2000 season. It was a reminder that the ‘silver-plated’ talents Wenger was able to turn to gold hadn’t grown up dreaming of the marble halls and Art Deco environs of Highbury, but the cathedral structures of the Bernabeu and Camp Nou.

So had their agents, with Wenger claiming: “The Anelka departure showed just how easy it was for a player to have his head turned by advisers.” The nature of Anelka’s departure from north London wasn’t a unique event in English football at that time – both Jimmy Floyd Hasselbaink and Pierre van Hooijdonk left Leeds and Nottingham Forest respectively under controversial circumstances – but the rapid metamorphosis of ‘Super Nic’ into ‘Le Sulk’ was both cautionary and poignant on several levels.

Throughout the rest of his nomadic and often-turbulent career, Anelka returned to N5 with Liverpool, Bolton and Chelsea, to a predictable chorus of booing.

Beyond the bile, there was also a lingering sense of regret – mainly from Anelka himself. On several occasions, he expressed sorrow and admitted: “Wenger was the coach who understood me best. I was impetuous at times, and didn’t always behave as I should have done.” His seismic fall-out with France coach Raymond Domench at the 2010 World Cup (the player was sent home after a verbal assault on his boss) and controversial quenelle gesture at West Brom suggested that Anelka – even in his 30s – never possessed much of a filter.

There was much conjecture about how things would have panned out had he stayed. The likelihood was that fellow Frenchman Thierry Henry wouldn’t have arrived in the summer of ‘99, given Arsenal’s limited transfer budget. Could Anelka and Henry have dovetailed at Highbury? Henry has since stated that he would have “loved the chance to play alongside Nicolas,” although he publically distanced himself from Anelka at the time, keen to avoid comparisons with him. Anelka was suitably opaque: “Maybe it would have been interesting. We might have encroached on each other’s turf. I don’t know.”

Anelka later won silverware with Chelsea, but – all too briefly – the spiky teenager and prodigiously gifted footballer hit his brilliant best at Wenger’s Arsenal as the Millennium dawned. Sadly, the ‘Anelka-gate’ scandal of 20 years ago will forever taint his reputation.