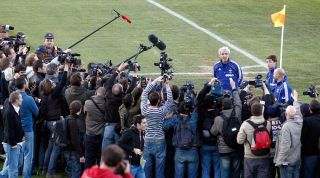 Do we have your attention? Then FourFourTwo shall begin.

In many ways, the 2010 World Cup was a bit of a damp squib. Despite initial fears, it was well-attended, well-organised and relatively free from crime. But the football itself was drowned out by the deafening noise of the vuvuzela and complaints about the unpredictable movement of the Jabulani ball, while the goals-per-game average of 2.27 was the lowest since the ultra-defensive Italia '90 – which at least had the excuse of back-passes still being allowed.

With the hosts falling at the first hurdle, despite a great goal in their first game and a consolation win in their last, the tournament seemed to lack that certain je ne sais quoi – an interesting choice of language when you consider what we’re about to recall.

Because what South Africa 2010 did have was one of the biggest scandals in finals history. Long gone was the esprit de corps that carried France to victory on a tidal wave of home support in 1998, to be replaced by an atmosphere so poisonous, mutinous and disharmonious that a parliamentary commission was put together to find out what went wrong. The short answer is: everything.

Les Bleus were never likely to be anybody’s second-favourite team after they only made it through via Thierry Henry’s blatant handball in their play-off against the Republic of Ireland. Even most of their own fans thought the 2006 runners-up were undeserving of a place in the finals, with 60% of L'Equipe readers believing group opponents Uruguay, Mexico and South Africa all had a better chance of progressing.

While it was Nicolas Anelka’s extraordinary outburst (see top) – during an argument with Raymond Domenech at half-time of the second match against Mexico – that attracted most interest, there was little sympathy for the coach. In fact, he was lucky to still be in a job after France had finished bottom of their group at Euro 2008, to which Domenech responded by proposing to his girlfriend pitchside in front of the TV cameras. In fact, France’s implosion was a story featuring only bad guys. Nobody came up smelling of roses.

The uneasiness in the camp existed long before the tournament kicked off, from the moment talisman Henry was informed by Domenech that he would be in the squad but unlikely to start, meaning the captain’s armband would be passed to Patrice Evra.

This was unbeknown to most neutrals, who instead took pleasure from pictures of France’s unorthodox pre-tournament training camp in the ski resort of Tignes – chosen because it would help the squad acclimatise to the high altitude they could expect in some of South Africa’s host cities.

This attempt at team bonding soon backfired, though, when holding midfielder Lassana Diarra suffered severe intestinal pain and stomach cramps as a result of the altitude, and was forced to withdraw. William Gallas and Anelka emerged unscathed after falling off a quad bike and bicycle respectively, but the accidents only added to the air of farce around the squad.

Already unpopular with their fans after deciding to base themselves in a luxurious, high-security compound on the Indian Ocean, France soon began to fight among themselves, with a reported split in the camp between introverted youngster Yoann Gourcuff and some of the old guard. One story even suggested that in the opening game against Uruguay – from which France were lucky to escape with a 0-0 draw, despite playing against 10 men for the final 10 minutes – Anelka and Franck Ribery had refused to pass to the young playmaker.

Either way, Gourcuff was clearly a troubled soul and made way for Florent Malouda as Domenech reshuffled his front six for the next game against Mexico. France lost 2-0 in a truly awful performance. Notably, Henry didn’t start either game; nor did he replace Anelka after the latter was withdrawn at half-time following his row with Domenech and subsequently expelled from the squad.

Then came the nadir. France needed a miracle to qualify via a heavy win against South Africa, and a similar result between Uruguay and Mexico. At the very least, they needed to regain some pride and popularity. But an open training session in the build-up to the game against the hosts – which began with an autograph-signing session – ended no sooner than it had begun, with Evra and fitness coach Robert Duverne having to be pulled apart following a row. In front of a disbelieving press and public, the players retreated to the team bus and pulled the curtains.

In the middle of all this, Domenech emerged to read a statement composed by the squad voicing their disapproval that Anelka had been sent home without them being consulted.

France’s team manager resigned in disgust, the French Football Federation hit back with a statement of their own, and what remained of the squad tried to prepare for the game against South Africa. Evra was missing, but there was still no Henry from the start despite Anelka’s absence, while Gourcuff returned. Not for long, though: a flailing elbow in the 25th minute ended a miserable tournament for him and, effectively, France. Needing a four-goal victory in the end, they lost 2-1 to the relief of everybody – probably including themselves.

Anelka was given a career-ending international ban, Evra a shorter one and Domenech departed amid rumours he didn’t even deliver a team talk for his final game. In a final act of childish defiance to suit the squad's mood, the curious coach refused to shake opposite number Carlos Alberto Parreira’s hand at the final whistle. Bitter until the end.