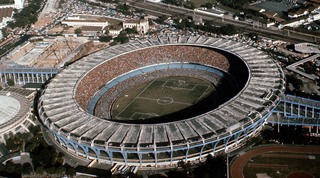 Pele, Zico, Garrincha, Romario, Ronaldo, Ronaldinho, Neymar - we could go all day - are just a handful of the iconic names to have called the Maracanã home down the years. Brazil’s largest football stadium has seen 200,000-strong crowds, World Cup finals and the Olympics, and is invariably included on the bucket lists of football fans around the world.

But it is expecting visitors of a different kind over the coming months, with thousands of COVID-19 patients to be treated at the 80,000 seater venue, which is regularly used by Rio-based clubs Santos and Corinthians as well as the national team.

Workers began preparing the site on Tuesday, with a field hospital capable of hosting patients carrying the virus to be erected as quickly as possible.

Organisers are planning to preserve the pitch itself, but will use the space around it - including the area that was formerly an athletics track - and the enormous car park outside to help house sufferers. The stadium will be used as a logistics centre and storage facility amid the global health crisis and will be ready for use before the end of next week.

While not the first football stadium in Brazil to be used for such a purpose - the Pacaembu Stadium in Sao Paulo and the National Stadium in Brasilia are already being used as emergency health centres - it is the largest, and first of its kind in Rio De Janeiro, one of the most populous cities in the country.

There have been approximately 7,000 cases of coronavirus in Brazil so far, with the death toll approaching 300.