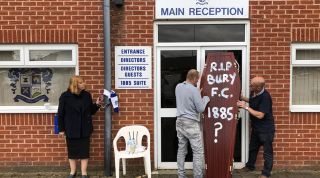 FAN'S VIEW The final week of Bury FC? How my club came to the brink of extinction

When did the troubles start?

Former owner Stewart Day sold the heavily-indebted club for £1 in December after his property development company got into serious financial trouble. New owner Dale, a Cheshire-based businessman, failed to clear the debts, with staff going unpaid and the club served a winding-up petition by HMRC.

The @EFL have issued the following statement after today’s news of the CVA being agreed upon  #buryfchttps://t.co/qGc8HJQgYE— Bury Football Club (@buryfcofficial) July 18, 2019

The petition was dismissed at the High Court in July after creditors approved a company voluntary agreement. That saw the Shakers, who were promoted last season despite the turmoil, given a 12-point penalty before the season began.

Why have they not played any games?

Despite the CVA being approved, Bury’s opening game of the season against MK Dons was postponed, with the Football League not satisfied by the club’s financial assurances. Dale branded the decision an “injustice” but four further league matches were postponed and a Carabao Cup tie awarded to Sheffield Wednesday.

On August 8, Bury were told they faced expulsion from the league if they could not rectify the situation.

What steps have been taken since?

Four days later, Dale said he would sell the club after staff issued a statement begging him to go. But there has been no progress, with Dale rejecting an offer from former Port Vale owner Norman Smurthwaite on August 20. This has only increased the sense of doom at Gigg Lane but local MP James Frith, Greater Manchester mayor Andy Burnham and sports minister Nigel Adams have asked the league for more time.

EFL boss Debbie Jevans responded by saying the league could give Bury “another 24 to 48 hours” but only if a credible solution emerges on Friday.

Dale has claimed he has received inquiries from four parties, and it is understood that at least one of them has been in contact with the league, too. But time is running out and it now looks more likely than not that Bury will become the first club to be expelled from the league since Maidstone in 1992.

That means League One will continue with 23 teams, with only three relegated to get the number back to 24 next season. Bury will be invited to rejoin the league pyramid next season, probably at the seventh or eighth tier, ending the club’s 125-year EFL tenure. However, this would almost certainly be a new or ‘phoenix’ Bury, as Dale will have no choice but to liquidate.