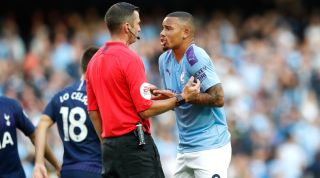 First things first, an apology. In July, we published a piece about 2019/20’s rule changes and thought the amendment to Law 12 regarding accidental handball – “it is an offence if a player scores in the opponents’ goal directly from their hand/arm, even if accidental” – wouldn’t cause too many problems. Oops.

A fortnight into the new Premier League season and we already have two goals, and wins for Wolves and Manchester City by proxy, ruled out for accidental handball in the build-up. Planet football has gone nuclear.

First comes the the technological fallout. VAR is ruining football! The emotion has gone!! There’s a conspiracy against Manchester City winning the league!!! Then follow the sardonic replies of correct adherence of procedures. Finally, both groups start sniping at each until proving Godwin’s law.

By any measure, VAR got it unequivocally right, according to the law. Whether you agree with the rule change itself is neither here nor there. Ian Holloway doesn't, but then neither does he seem to know arse from elbow. All goals are automatically checked by VAR, and any handball that leads to a goal is a free-kick. Simple. To conflate the two is either lazy or wilfully ignorant, the fan equivalent of a Danny Mills Sheffield United preview.

“It’s not VAR’s fault,” said Gary Lineker on Match of the Day. “It’s the new law which has put VAR in an invidious position, with no leeway to make nonsensical decisions.”

It will never be perfect, but we’ll get used to it and ultimately it will make the game fairer. It’s not, though, being helped by the recent handball law changes where VAR is being forced into making decisions that are, quite frankly, ludicrous. https://t.co/uawgzNw9Ht— Gary Lineker (@GaryLineker) August 19, 2019

True, there are intricacies at play here. It’s hard to square that a goal can be ruled out for accidental handball, but a penalty not given against a defender if the same situation were reversed. Equally, you can understand Manchester City fans’ annoyance that there was no VAR intervention on what seemed like a first-half penalty, but again, correct procedure was followed. It’s the grey area between ‘clear and obvious error’ and ‘no goal scored via handball’ in the law which is the problem here, not VAR itself.

After years of whinging and belittling of referees for getting the most marginal of calls wrong, we must now live with it. We’re the turkeys who voted for Christmas, but refused to stop clucking. If IFAB are to believed, that’ll take a tiresome 10 years.

Manchester City have, unsurprisingly, been quickest to adapt to the law change that defenders can receive the ball from a goal-kick inside their own penalty area. Pep Guardiola has obviously spent much of pre-season drilling his centre-backs to retreat for the restart, luring out the opposition press and passing into midfield quicker and easier than before.

In Ederson, City also have a goalkeeper who can ping a 70-yard missile over the opposition and release Raheem Sterling at pace. Given you can’t be offside from a goal-kick, opposition can’t squeeze too high behind the press, for fear of the long pass in behind. Nature (and Pep) finds a way.

On the other hand, however, the well-meaning attempt to reduce time-wasting substitutions by requiring players to leave the pitch via the nearest touchline has had basically no effect. Whether too ingrained in their psyche or (more likely) told to ignore it, players of teams with something to hold onto in a game continue to trudge towards the halfway. They may as well wave at the referees on the way.

Invented by Spain at this summer’s Women’s World Cup to counter the law change that attackers must be at least one metre away from defensive walls of three or more players, the ‘attacking’ wall in front of a free-kick blockade is proving popular. Designed to disrupt the wall’s view, Liverpool are among the early Premier League adopters, with players scattering like naughty school children hiding cigarettes as the kick is taken.

4. Keep on your line

Despite initial reports that VAR wouldn’t be used to determine penalty area encroachment or goalkeepers not staying on their line, West Ham fell foul of Stockley Park (how soon before that becomes a knuckle-dragging insult for someone who follows the rules?) in their 5-0 opening day shellacking at home to Man City. Sergio Aguero got a reprieve for Declan Rice’s encroachment.

Hats off, then, to Jurgen Klopp in the UEFA Super Cup shootout. Keeper Adrian was off his line, but the German boss was lollopping onto the pitch to congratulate the Spaniard. Good luck overturning that.

The most important one. It’s great that head-to-head records between teams level on points, goal difference, goals for and goals against now decide league position (despite such an occurrence never having happened come season’s end), but WHAT DO WE DO AT THE BEGINNING OF THE SEASON, YOU FIENDS? Will nobody think of poor Wolves propping up the table on alphabetical order? Why is the Premier League so biased towards Arsenal? And who are the psychopaths who think it should AFC Bournemouth?

The best new law this season is the one that states a player entering the VAR room is a straight red.

The Premier League’s VAR room is in Stockley Park, 13 miles from the nearest PL ground. Any player making it there during a game to moan about a decision deserves a medal. pic.twitter.com/cLD9hs9s48— Conor Pope (@Conorpope) August 20, 2019