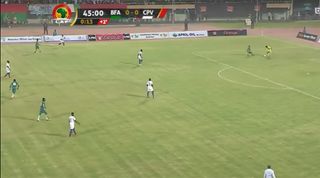 With the scoreline goalless in this World Cup qualifier where both nations had already failed to make Russia 2018, Evora plumped for a risky manoeuvre on the stroke of half-time.

The 18-year-old hesistantly tried to mask his clearance with a cute dummy, but ended up turning back towards his own goal.

At that moment, Nantes forward Nakoulma was breathing down his neck – but Evora didn't fancy clearing his lines, and instead tried to perform a neat spin around the Burkina Faso striker.

As expected, the piece of skill completely backfired and gave the deadly Nakoulma a simple tap-in.

Burkina Faso's 30-year-old striker went on to complete a hat-trick by the 62nd minute of his country's 4-0 demolition.

So overall, not a great day for Evora.