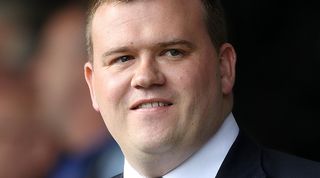 Bury were beaten 3-0 by the National League outfit in their FA Cup first-round replay at Gigg Lane on Tuesday night, courtesy of goals from Regan Charles-Cook, Innih Effiong and Jamie Philpot.

Shakers fans – who jeered their side throughout – weren't the only ones frustrated by their team's performance, though: Bury chairman Day released an apologetic statement on Wednesday and made his disgruntlement clear.

Day said in a statement on the club's official website [verbatim]: "The word performance goes nowhere near to summarising what we all had to experience and I can 100% state that it was not good enough!

"The attitude of the team was not acceptable and as a chairman and a fan I expect much, much more.

"The fans’ frustration was also echoed by myself and the board and that performance does not represent what Bury football club represents.

"The word deflated goes nowhere near to describing how we all felt."

Day continued: "To get knocked out in the way we did is extremely disappointing for me. We lacked fight, passion and desire – attributes that I, as chairman, expect the players to give when wearing the shirt of Bury Football Club.

"The players will be made to know what I expect, and the type of performance I expect from them."

Day was happy to admit that Woking were the superior side, but that his club will "move forward" from the defeat.

Interim manager and club legend Ryan Lowe also laid into his players post-match, calling Bury "a shambles". They host Blackburn in League One on Saturday.