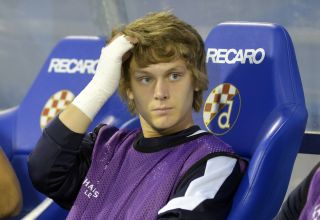 The past few months have been tough for Alen Halilović, yet things looked so good back in June. Eight days shy of his 17th birthday, he made his full international debut for Croatia in a friendly match against Portugal – and he certainly looked the part.

Three weeks later, news leaked from Dinamo Zagreb that both Halilović and Tin Jedvaj (another 17-year old) would be sold to Tottenham Hotspur for a hefty €20 million. The deal fell through, but negotiations were revived in August when the club confirmed they had received another offer from Spurs, this time just for Halilović, with Jedvaj long since sold to Roma. The club said they would accept it if the youngster’s family agreed to the move.

No move materialised before the closing of the transfer window, leaving the media – both in Croatia and in England - to speculate as to why the deal hadn’t been completed. Halilović was staying in Zagreb and there was still no explanation as to what happened.

In the meantime, Halilović’s form severely dipped. He has struggled to break into team – and when he has played, he has been poor. And that’s being generous.

Although he has still been involved in get-togethers with the senior national team, he is still to represent his country in a competitive match. After Croatia lost to Belgium at home in their recent World Cup qualifier, Halilović was sent to join his peers at the U17 World Cup in the United Arab Emirates.

That seemed the perfect venue for the 17-year-old to build confidence, but even there he has so far failed to make a significant impact. A lacklustre Croatia side lost 3-1 to Morocco in their opening match, before scraping past an unfancied Panama by a single goal. In both matches, his contribution has been disappointing.

So what happened? Had Halilović’s career hit the rocks before it had even properly begun? To answer that, we need to go back a year or so.

Last September, a Spanish TV crew travelled to Croatia to film a documentary about the early days of Luka Modrić, Real Madrid’s recent signing from Spurs. Among other places, they visited Dinamo’s Maksimir stadium to talk with coaches, board members and other club employees – each of them was eager to point out they had another huge prospect on their hands. His name was Alen Halilović and he had just jumped youth categories to join their U18s squad. The prospect was described as ‘special’ and Dinamo’s ‘biggest talent in 20 years’. Forget the comparisons to Modrić, some uttered his name in the same breath as Lionel Messi.

But the Spaniards didn’t need too much convincing. They had already heard of Halilović and knew he had nearly moved to the Bernabeu at 14. They had seen his YouTube compilations where he dribbled and scored for fun, mixing top-corner blasts from 20 yards with subtle ‘Messi chips’ that went just over goalkeepers. They filmed an U18s practice session with the focus on El muchacho rubio, 'the blond boy'.

Just two weeks after that, Halilović was moved to the first-team squad and made an appearance in the Eternal Derby against Hajduk Split as the youngest-ever debutant in the league. In the next league match, he came off the bench to score his first senior goal, aged 16 years and 112 days.

In October 2012, he became the second-youngest player to appear in the Champions League (after ex-Chelsea and Newcastle defender Celestine Babayaro) and was made famous by the ridiculous photo of him shaking hands with PSG’s Zlatan Ibrahimović, prompting one popular UK football blog to describe him as a “mop-topped foetus with hair like Martina Navratilova”.

The Halilović hype grew and grew, reaching its high point last summer with the transfer saga.

When the deal failed to materialise, all kinds of stories appeared, mainly stating the player’s family wasn’t happy with the youngster moving so soon, and that they had rejected the terms offered. Some said his father Sejad had asked for more money and a bigger house from Tottenham; others claimed that Arsenal tried to hijack the deal, offering Sejad a job as member of their youth coaching or scouting staff .

The transfer window passed but Dinamo failed to release any kind of statement. Everyone had expected Halilović to take the league by storm, but he was given fewer chances to play and forced out on to the right wing, where his game became all too predictable. A compilation of his season highlights so far would look like a montage of Arjen Robben’s worst moments: he would dribble past one opponent, then crash into another and bounce off him, and wouldn’t pass the ball under any circumstances.

Then, last week, Halilović’s father, himself a former professional who captained Bosnia in the 90s, broke his silence. Alen was a victim of a "media lynching", he said, adding that Dinamo chairman Zdravko Mamić hasn’t talked to him for two months because his rejection of the move to London cost the club €15m.

As you’d expect, he also dismissed stories suggesting he’d asked for more money or a job for himself as "complete fabrication". What he wanted was for his son to gain proper playing experience before moving to England, because he felt Alen was not yet ready.

He sounded particularly bitter when teling Zagreb’s Jutarnji List: “All of you journalists wrote it was better for his development to stay at Dinamo for another year. I agreed, but looking back now I wonder if I made a mistake, if I should have taken him abroad…”

On Monday, Sky Italia’s Gianluca Di Marzio – famous for breaking many big transfer stories – reported that Spurs were still prepared to offer €20m for Halilović, and that three separate meetings between the London club and Dinamo’s representatives had taken place. Once again, the suggestion was that it was satisfying the player’s father that was proving the biggest stumbling block.

You often hear stories about players moving abroad too early – but could this turn out to be the case of one moving too late for his own good?

Make no mistake, Halilović is the real deal, as anyone who has seen him in action will testify. He’s not another Freddy Adu, but one of those rare players who just have something totally different. His problem is that his club have pushed him too hard and too soon, due to their eagerness to make him into another ‘project’ that will make them millions.

The truth is, Dinamo is not currently a good place for a young talent to develop. A club perpetually at war with its own fans and constantly getting humiliated in Europe, they have brought in mediocre foreign players who are taking Halilović’s place.

They’ve also sacked three head coaches since the youngster made his debut and, despite having an annual budget almost as big as all of the other clubs combined, still trail Hajduk Split in the title race – albeit only on goal difference. NK Rijeka and Lokomotiva Zagreb are just one point behind.

During the past year, they’ve only taught Halilović how to dive (very badly), how to quarrel with referees and how to play for himself rather than his team. He hasn’t stagnated in his development; he has regressed.

It is now surely the right time for the club to let go, before it’s too late for all parties.