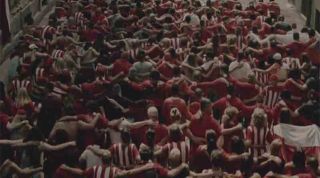 We all know what it feels like on a matchday; when your whole week has been geared towards one day… one game.

It’s all you can think about. You love it and hate it at the same time, that feeling of excitement and dread. This is how it feels when something really matters.

You also know that you’re not alone; that thousands of other fans, like you, are feeling exactly the same thing. A whole season’s work has built up to this game and everybody knows it.

You also know that your opposition’s fans are feeling it too, and that makes you feel a bit better. Until you think of them winning, that is, and you feel that dread all over again. But then again: what it we won? What if we did it?

And this is what it is to be a football fan: hope – always, the hope – followed by the fear. We have to win. We need to win. We can’t win. We will win!

Football fans might differ with their opinions on certain subjects, but they’re always joined together by the above – the excitement, passion and loyalty of football.

Kia knows this. It’s why they’re on a mission to empower football supporters through the Europa League this season. They’re football fans themselves, and know exactly how we feel during these huge matches; when one game can be the difference between success and failure.

Whatever happens, we all share it together. And when we are together, we’re united.