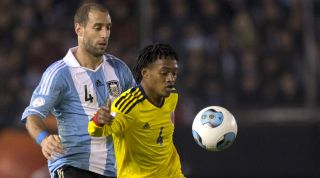 While Radamel Falcao’s absence from the World Cup wasn’t entirely unexpected, it nevertheless threw the plans of coach Jose Pekerman into doubt. Should he continue with the 4-4-2 system? Should he switch to 4-2-3-1 instead? Which of his (other) four excellent strikers should he deploy? Does James Rodriguez deserve to be brought inside from the left flank, into a No.10 role? Such were the plethora of options at Pekerman’s disposal, and the subsequent multitude of decisions to be made as he planned for Colombia’s opening game against Greece.

One situation that was never a bother, however, is out on the right wing. There, Juan Cuadrado is an obvious selection, and while he wasn’t always a regular throughout qualification, no Colombian player arrived at this tournament on the back of a better club campaign. Cuadrado was superb throughout 2013/14 for Fiorentina, selected in many best Serie A XIs. If he shows anything like that form in Brazil, he’ll be one of the revelations of the tournament.

Cuadrado feels like something of a throwback – he’s an old-school right-winger that dribbles at speed and takes on opposition left-backs down the outside. In the age of playmakers being fielded on the flanks and drifting inside to create, and inverted wingers cutting inside before letting fly from distance, Cuadrado is more simple. He’s comparable to fellow South American winger Antonio Valencia of Manchester United and Ecuador, in that he's an old-fashioned outside-right who also offers great defensive discipline - no surprise, given he is a converted right-back.

Indeed, should Cuadrado leave Fiorentina this summer, there’s a good chance he’ll be redeployed as a right-back by his future employers. Barcelona have been strongly linked, seemingly seeing him as a replacement for Daniel Alves, while the suggestions that Arsenal and Chelsea are interested suggests something similar – both are sorted in the attacking midfield department, but have a vacancy on the right of defence.

At the World Cup, however, Cuadrado will play higher up. And while Valencia is a decent comparison in terms of his movement and running, Cuadrado offers far more end product. In truth, this is something of a recent development, as if he’s only just realised that when deployed as a winger, he’s expected to contribute goals. Some of these have been as you’d expect – fine finishes across the goalkeeper after a burst of pace past the last defender. But Cuadrado has also hit a few excellent long-range strikes, too, proving you don’t need to be fielded on the opposite flank to your ‘strong’ foot to be a consistent goal threat. He hit 11 league goals last season, up from five in 2012/13.

Master of the dribble

Cuadrado confirmed his status as one of Serie A’s most dangerous players in a game he actually lost. In December, Fiorentina travelled south to Roma for one of the most entertaining contests of the season, a match between two adventurous sides who both started the campaign strongly. Both deployed a 4-3-3 formation with a false nine, and almost all of the play went through two wingers, who were located on the same flank. Cuadrado was on the right for Fiorentina, and Gervinho on the left for Roma. Every time the sides won possession, they immediately transferred the ball out to that wing.

It essentially became a contest to see which could dribble past opponents more regularly, and provide a decent ball into the middle. Gervinho, like Cuadrado, had a newfound sense of efficiency in the final third, putting his profligate Arsenal days behind him and becoming a consistent goal threat under Rudi Garcia, his old coach at Lille. Gervinho eventually got the better of the contest, with his dribbles taking place in more dangerous positions, and he teed up Mattia Destro for the winner in a 2-1 Roma win. But Cuadrado was superb too, and continued that way throughout 2013/14.

It was nevertheless a hugely frustrating finale to the campaign for the Colombian. With Fiorentina exiting the Europa League at the hands of arch rivals Juventus and never really seeming set for a Champions League spot, their focus was on the Coppa Italia. Cuadrado was the man who sealed Fiorentina’s place in the final with a superb solo effort against Udinese, his former club. But in the 90th minute of that semi-final second leg, he picked up a booking that ruled him out of the final, which Fiorentina lost to Napoli.

Cuadrado still finished the league campaign strongly. He was sensational in a 3-0 win at Bologna, where he was given to drift across the pitch laterally as he pleased, and registered two goals and an assist.

Indeed, with six goals and two assists in his final seven Serie A games, we may yet get the dubious pleasure of Cuadrado’s rather peculiar goals celebrations. He insists on producing an improved solo dance, but it’s often more Peter Crouch than Siphiwe Tshabalala.

Although he is yet to score, Cuadrado has been an electric option for Colombia during their two group games so far. Should he continue in this vein, they could go far - and it won't hurt his own career, either.