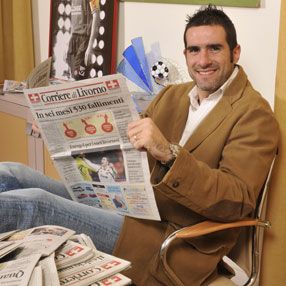 For more than 100 years, my home town of Livorno was one of a few Italian cities with just one local paper, which meant a complete monopoly on local news. Livorno’s population is more than 200,000 and I decided that it was about time to give the locals an alternative source of information.

Corriere di Livorno was launched on September 9, 2007. It was not a random decision to launch on 9/9. The number 99 represents my sense of belonging to Livorno and to the people of Livorno. Indeed 99 – Lucarelli’s shirt number at Livorno and Shakhtar – refers to 1999, the year that the Italian club’s left-wing supporters group, Brigate Autonome Livornesi, was founded.

Our newspaper is mainly focused on local and regional issues but we do have pages about national and international politics, the economy and, of course, sport. There’s absolutely no way that my own political views will be reflected in the newspaper’s stance [Lucarelli has always been proud to voice his socialist beliefs]. I have absolutely no influence on the paper’s coverage.

As the founder, I have appointed the right people to run the paper and I am happy for them to represent me. I told the editor and journalists categorically that the newspaper must pursue a neutral stance, irrespective of their personal beliefs. Corriere di Livorno aims to look at issues impartially.

We have tried to create a new type of paper – both in terms of style and content. The other local newspaper, Tirreno, has 107 journalists working on it, and they are qualified specialists – but they are also mainly of a certain age, whereas we have put the emphasis on youth. We want to lay the foundations for the next 10, 20 or 30 years. Maybe our journalists are less experienced, but they have a great future.

As I’ve been based in Ukraine, I haven’t had any hands-on involvement in the day-to-day running of the paper.

However, I can read the latest issue every day via the internet, as we also have an online version (www.corrieredilivorno.it). Some reports have claimed that I was given use of the Shakhtar Donetsk president’s private jet to allow me to travel back to Italy regularly and keep an eye on the paper while I was in Ukraine. That’s just one of many myths that are always being written about me.

In Italy, we don’t have the same distinction that you have in the UK between tabloids and broadsheets. Our newspaper is designed to be read by all of the citizens, though we know that it’s particularly popular among the younger sections of the community.

So far the newspaper has cost me about  2 million. I don’t expect to make a profit, but let’s say that I’d be happy to know that I’m providing a good service for the people of Livorno without losing too much money.
Of course we give plenty of attention to sport, and football features predominantly – at least five pages every day.

I have no problem with the sports editor running a piece that is critical of me as a footballer. That has already happened, in fact. In the report on Italy’s game against France in September, the sports columnist graded my performance with a low mark: five. To be honest, I didn’t deserve that. But the journalist is still in a job!

I have seen in the past how friendly relationships between journalists and footballers can influence the objectivity of a report. Or cases where a particular viewpoint is adopted purely because of personal sympathy or antipathy towards the subject. I want to strive for maximum objectivity – not just in the sports pages. That, for me, is the test of a publication’s professionalism.

All I want is for the paper to be a platform for the facts as they happen; for objective reporting. It’s not designed to be a campaign vehicle for my personal views. It doesn’t matter if you are right-wing or left-wing, as long as your ideas are honest and you judge even�ts as objectively as you can. I’m sure there are other Italian footballers who have an interest in politics, it’s just that sometimes it’s more convenient to hide one’s beliefs in order to avoid problems.

We are already planning to expand. In the near future we are set to move into other areas within our province. And hopefully, we will also launch a separate paper for the city of Pisa at some point.
I have no desire whatsoever to become a full-time media magnate. Absolutely not! My intention is to stay in the world of football once I stop playing. I’ve no ambitions to become ‘a Berlusconi for the left’. Sadly, I don’t think I’ll be quite as successful as him...”

With thanks to Roberto Filippi of Lucarelli’s official website www.cristianolucarelli.com