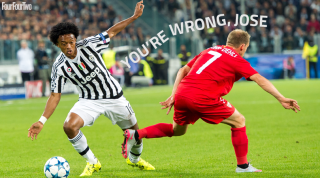 Having made just four Premier League starts after joining Chelsea from Fiorentina for £26.8 million in January, Juan Cuadrado was so desperate to leave Stamford Bridge this summer that he expressed gratitude to a supreme being when the chance to swap west London for Turin presented itself at the end of the transfer window.

“The truth is, I don’t know [what went wrong],” the flying winger said of his ill-fated seven months in the Premier League. “I was always professional, and I always trained very well. I didn’t play as much as I wanted, but I was always ready. I thank God, my agent and Juventus for this opportunity. It’s a new challenge for me.”

Cuadrado has taken full advantage of the loan move so far, establishing himself as a key player in a Juve team that has endured a difficult start to the Serie A season. Recent reports have suggested that the club will look to make the deal permanent next summer, bringing to an end the Colombia international’s time in England and confirming his place – whether his fault or not – in the list of the worst-ever value-for-money Premier League signings.

Despite beginning the campaign badly – the Italian champions have won only two of their opening eight matches – Juventus have been one of the most interesting sides to watch on the peninsula in a tactical sense.

Max Allegri chopped and changed formations between games last year, but this time his side have regularly switched shapes during the course of the 90 minutes: Juventus currently employ what has been termed a hybrid configuration, seamlessly morphing between a 3-5-2 or 4-3-3 when attacking and 4-4-2 in the defensive phase of play. It is, according to former Chelsea and Watford manager Gianluca Vialli, “a system that will be used by most of the big European teams in a couple of years”.

Cuadrado, who has played both as a wing-back and out-and-out winger in his career, is essential to such an approach. The 27-year-old is expected to become part of a front three and provide width on the right when Juventus move forward, before dropping back and making a midfield quartet when the opposition is in possession.

As well as his important tactical work, Cuadrado has become his new club’s principal source of creativity in the opening weeks of 2015/16. His speed and directness helps Juventus turn defence into attack quickly, while his tricky feet and close control have caused numerous problems for the division’s full-backs. Although Cuadrado’s final ball can be a little erratic, it is notable that no Juventus player has fashioned more chances than him, despite the fact that he has started only four league games since returning to Italy’s top flight.

Given his obvious quality, it is difficult to comprehend the Colombian’s disastrous spell at Chelsea, whom he represented for just 362 minutes in all competitions. Cuadrado seemed to be the perfect fit for the hustle and bustle of the Premier League, with many predicting that his blistering pace would prove an important attribute for a team managed by a man who believes that games are won and lost on the transition.

There were some mitigating factors that can, at least in part, explain his lack of first-team action: Cuadrado arrived at Stamford Bridge in the middle of the season with the Blues targeting glory both domestically and in Europe, and naturally found it difficult to break into a winning team. With PFA Player of the Year Eden Hazard in sparkling form and Willian established as a Mourinho favourite, there was simply rarely ever room in the starting XI for Cuadrado, who struggled to make much of an impact in the sporadic appearances he did make.

The former Udinese man, moreover, is far from the complete player. For all of his fancy footwork and dazzling dribbling, Cuadrado is often not efficient enough in the final third, as evidenced by his tally of just 31 career goals at club level to date.

Nevertheless, it is curious that Chelsea seem ready to offload their sixth-most expensive signing of all-time a matter of months after he was identified as a player who could take the squad forward.

The episode again calls into question Jose Mourinho’s relationship with flair players in the Juventus loanee's mould. Playmakers Juan Mata and Kevin De Bruyne are enjoying success in Manchester and wideman Mohamed Salah is thriving in Rome after all three were previously discarded by the 52-year-old, while Hazard was dropped for Chelsea’s 2-0 victory over Aston Villa on Saturday for a perceived lack of defensive work and tactical discipline.

Cuadrado, an off-the-cuff magician who, while happy to put a shift in without the ball is predominantly a forward-thinker, was perhaps always destined to fail at Stamford Bridge given Mourinho’s preoccupation with the collective.

“If a luxury player is a player who scores and assists and has good stats – then I’m happy to be a luxury player,” Manchester United’s Mata told TheTimes earlier this week, referencing his ex-coach’s previous implied criticism of him. “I want luxury players in my team. I like creative players and players who do different things. It’s easy to say certain players are luxuries, especially when you’ve lost a game. When you lose a certain kind of player – the creative players – always get the blame.”

Cuadrado is unlikely to be overly concerned with his unhappy stint in the Premier League at present, with the 27-year-old already becoming virtually undroppable at Juventus Stadium following his return to Italy in August.

The episode retains relevant in relation to Mourinho, however. Though the former Porto, Inter and Real Madrid boss has already established himself as one of the greatest managers in recent history, his unwillingness to fully trust the scheming playmakers and flamboyant individualists remains an issue that has perhaps prevented him from winning even more trophies than he already has.

Cuadrado, then, is not merely the one that got away but the latest in a line of talented entertainers for whom Mourinho could find no place.