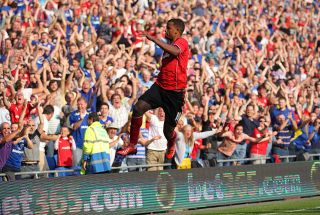 Saturday's comprehensive victory at Craven Cottage was a surprise only to those foolish enough to buy the 'crisis club' narrative. While it's fair to question why Arsenal aren't reaching into their pocket as deeply as they ask their fans to, Arsene Wenger's squad is merely lacking in depth rather than quality.

With Santi Cazorla playing in his strongest position, and Olivier Giroud in confident goal-scoring form, there are few teams who won't be troubled by the Gunners, even if the last week of the transfer window doesn't bring huge investment. That will be what's required to make them title challengers, but to suggest that, as things stand, they're way behind the other contenders for fourth spot is fanciful. (JM)

2) ...and need not look far for midfield security

While much of the tabloid tittle-tattle centres on a certain large-haired midfield enforcer, perhaps the Premier League's bigger clubs - yes, you Arsenal - might look elsewhere for a bustling figure in their threadbare engine rooms.

He doesn't come with the reputation of his Belgian counterpart Marouane Fellaini, but Crystal Palace's Mile Jedinak will earn plenty more admirers if he churns out performances like that of his at the Britannia Stadium on Saturday.

Despite talk concerning Stoke's new aesthetic (before they netted from a trademark throw-in), the visiting Aussie was the game's top passer (completing 48 of 59), proving there's plenty more to his game than grit.

But he'll not shy away from the defensive side: nobody made more clearances (14) or won more aerial duels (9 of 14) than the midfield anchor, who also won three of five tackles, made two interceptions and a block, and recovered the ball seven times.

At 29 Jedinak is no spring chicken, but that shouldn't deter potential suitors seeking cheaper alternatives as the transfer window draws to a close. It's only his first season in the top flight - but could be an ever bigger one than he thinks. (JB)

3) Cardiff are making us all fickle (well, a bit)

Let's be honest - who thought much of the Premier League's newly promoted clubs this summer?

Sure, Cardiff were the most fancied for survival after winning the Championship rather comfortably last season but... well, they'd hardly pulled up many trees either.

Anybody watching Malky Mackay's side on Sunday, however, may have already changed their minds.

The Welsh outfit harried, harassed and generally made life uncomfortable for a Manchester City side who quickly ran out of ideas against their nuisance South Wales opponents. Sure, it was set-pieces that proved decisive, but the hosts did much more than punt a few balls into the box to take advantage of Vincent Kompany's absence.

It wasn't all about Campbell, though. Gary Medel was superb defensively, Kim Bo-Kyung neat in midfield and Ben Turner a rock at the heart of defence with 15 clearances to his name.

Cardiff were easily outdone by West Ham on the opening day, but on this evidence there's plenty to suggest that doesn't have to happen more frequently than they'd care to hope. (JB)

The summer may have been dominated by the future of Luis Suarez – among others – but Liverpool supporters have spent the last two weekends salivating over another forward in the form of Daniel Sturridge.

The former Manchester City and Chelsea speedster’s solo strikes have ensured a perfect start for the Merseysiders despite the absence of the suspended Uruguayan. After drilling home the winner in the season-opener against Stoke, Sturridge danced past the Aston Villa defence and poked home from an acute angle to settle Saturday evening’s clash.

With Suarez watching on from the sidelines, the 23-year-old has relished the opportunity to become the Reds’ leading man, rather than feel pressured to fill his sizeable shoes which have helped plunder 38 league goals for Liverpool.

“I don’t feel any pressure,” Sturridge told the BBC after Saturday’s success. “I’m out there to do a job. I don’t play with any pressure anymore. I used to, now I just play to enjoy it.”

It has left fans licking their lips at the prospect of Sturridge, Suarez and the equally impressive Phillipe Coutinho combining, assuming Suarez is still there come September 3rd. (GD)

5) Variety is the spice of life for Spurs

Tottenham may have failed to score from open play for the second week running, but there were still positives to take from their attacking display against Swansea. Chief among these was the performance of Andros Townsend, who deputised for Aaron Lennon on Tottenham's right wing.

Lennon has been one of the most dangerous wide players in the last six or seven years of the Premier League, but Townsend's game - particularly the variety in it - may be about to nudge the 22-year-old ahead of the former Leeds man in Andre Villas-Boas' pecking order.

Making his first Premier League start for Spurs, Townsend was a threat both on the byline and when coming inside. He saw a stinging 25-yard drive dip just over the crossbar, and won the penalty from which Roberto Soldado scored the only goal of the game.

His willingness to both take on his full-back on the outside and cross with his right foot, or cut inside before shooting with his left, makes him a tricky player to keep a lid on.

The winger proved during his loan spell at QPR that he is comfortable playing on either flank, and with Villas-Boas believed to be looking for versatility among his playing squad, it could be that Townsend's face fits best. (JM)

It's evolution not revolution for Mark Hughes at Stoke. The club's clear aim is to play better football, but they would be unwise to do away with everything Tony Pulis made them excel at – and the signs from the game against Crystal Palace were that Hughes' side won't be a different kind of one-dimensional.

As was almost always the case under Pulis, they had minority possession, albeit only fractionally – and as was frequently the case under the former manager, they were dangerous even when they weren't in control of the ball.

In the first half, Stoke completed 186 passes out of 226 compared to Palace's 163 of 202 (and more than they managed in the entirety of Pulis's last home game: 160 of 231). But in the second half, trailing to Marouane Chamakh's 30th-minute goal, they spent much less time retaining possession in defence - which is a polite way of saying they got it forward earlier.

After the break, Stoke completed just 130 of 181 passes (compared to Palace's 181 of 231), but came from behind to win - with a goal from a centre-back. Ryan Shawcross's winner was one of 10 second-half shots, compared to four before the break. Indeed, Stoke completed almost as many short passes before Chamakh's goal as they did in the hour after it.

While Hughes may make his side easier on the eye, they're clearly not going to hang around passing pointlessly when there's a game to win. (GP)