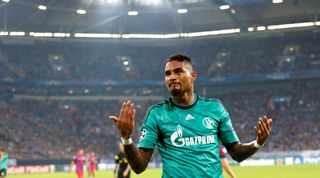 Arsenal’s star-studded battle against Borussia Dortmund may be the game on everyone’s lips, but Chelsea are also in Champions League action against Bundesliga opposition in the form of Schalke 04.

Here's what to expect from the Gelschenkirchen outfit...

It’s so far, so good for Schalke in Europe this season. Two wins from two reads well on paper for the 2011 semi-finalists, who sit top of Group E after Chelsea's shock home defeat to Basel left the Londoners trailing their Bundesliga rivals by three points.

On Matchday One, Schalke brushed aside whipping boys Steaua Bucharest with a three-goal second-half glut that proved too much for the floundering Romanians. Even right-back Atsuto Uchida got on the scoresheet – just his second goal in 112 appearances for Die Königsblauen.

Unlike Chelsea, Schalke had no problems overcoming Basel, thanks to Julian Draxler’s beautiful volley nine minutes after half time.

But Schalke will need their European mask on, rather than their domestic one, when Chelsea head to Gelsenkirchen. On Saturday they needed an injury-time winner from Roman Neustädter to see off basement boys Eintracht Braunschweig, after twice falling behind to the newly-promoted side.

Now in fifth, Schalke have at least recovered from the dreadful start that included defeats to Wolfsburg and Hannover in their first three games, but there are big defensive problems still to be addressed.

Schalke will be without the services of star striker Klaas-Jan Huntelaar for the foreseeable future; the goal-getting Dutchman won’t be available for the group stages at the very least after undergoing knee surgery on Monday. Hungary international Adam Szalai has stepped up well in his place, though, netting four times in nine Bundesliga appearances this season.

Ultimately, the hopes of this young Schalke team rest upon the excellent Draxler, one of the shining lights of German football and still just 20 years old. He’s already scored in both of Schalke’s Champions League games this season and, playing on the left on midfield, he’ll be the man looking to get the better of ever-present Branislav Ivanovic on Tuesday evening. The Serb will have his work cut out.

It’s no Draxler has been touted as a future Germany captain, with seemingly every one of Europe’s top clubs clambering over one another for his signature.

Schalke have little to shout about defensively, though – indeed, they’re more likely to stare at the wall and think about what they’ve done (or haven’t, most importantly). Only four teams have conceded more goals in the Bundesliga this season. Interestingly, though, they're one of just two sides (Barcelona, the other) not to have conceded in the Champions League this season.

Elsewhere, keep an eye on 18-year-old central midfielder Max Meyer, the Germany U19 international thrusted into the mix this season after Lewis Holtby’s departure to Tottenham.

The biggest battle here – and one that may well win the game for Chelsea – comes in the centre of midfield, where Schalke look a little weak.

Marco Höger has been ruled out for the season and will likely be replaced by limited former Blackburn hothead Jermaine Jones, while former Borussia Mönchengladbach man Neustädter hasn’t quite sustained the form that earned him two caps for Germany at the tail end of last year.

If Frank Lampard and Ramires can keep things ticking over in the Chelsea engine room, they may well prove the difference for Jose Mourinho’s men at the Veltins-Arena. Doing their jobs will make life easier for the likes of Oscar and Eden Hazard, who should have too much for the Bundesliga side’s frail rearguard.

It's Jose's big chance to get a particular monkey off his back, too – intriguingly, the Portuguese boss has lost all six of his previous matches in Germany.

Jens Keller is a man under pressure after Schalke’s poor start to the season.

While speculation about the 42-year-old former Stuttgart man’s position has subsided in recent weeks, the jury remains out for many.

In their current state, Schalke are far behind the likes of Bayern Munich and arch rivals Borussia Dortmund in the Bundesliga, and unlikely to cause a stir in the Champions League beyond the group stages.

Keller admits his side would be content with a point against the 2012 winners – though that’s perhaps understandable with his side holding an early three-point cushion.

"With the fans behind us, obviously we want to give our best,” said the Schalke boss. "I have always said I want to win every game. But you have to see how the game goes, maybe a draw would be OK and we could live with that situation."

No humdinger here, then.