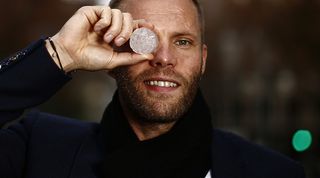 Former Chelsea and Barcelona star Eidur Gudjohnsen will be watching the World Cup with particular interest this summer, as Iceland prepare to make their tournament debut in Russia.

Gudjohnsen was in the Iceland squad that shocked England at Euro 2016, becoming one of international football’s ultimate underdog winners. Now, as 188BET’s ambassador for the 2018 World Cup, he chooses his best XI of players from the teams he regards as underdogs at this summer’s tournament. Such is the selection pool to choose from, Gylfi Sigurdsson and his fellow Icelanders narrowly miss out...

“I actually played with Maty at Club Brugge and he’s one of the best goalkeepers I’ve played with. He had the potential and after that he moved to Valencia, then eventually to the Premier League. I just think he’s an all-round great goalkeeper – the only thing is he’s not the tallest. But his athleticism and strength are unbelievable.”

“He’s played at the highest level for all of his career, and he’s still a great professional for Switzerland. They have done well at the World Cup before and it will be interesting to see how they do this time. They’re one of the few teams who've gone through a World Cup without losing and still got knocked out, back in 2006.”

“Benatia is certainly playing for an underdog country in Morocco and he’s another who has experience at the highest level. He’s played for Roma and Bayern Munich, and he played alongside Lichtsteiner at Juventus.”

“I don’t feel he has really fulfilled his potential at Manchester United but when he plays for Sweden, he looks like the player that everyone thinks he can become. He was really good at Benfica, too.”

“I’ve gone for Danny Rose because I just feel that England are one of the underdogs for this tournament. I actually played with Danny when I was at Spurs for a while and I think he’s developed into the perfect full-back: lots of energy, comfortable on the ball, very quick. He makes up for mistakes with his pace and strength.

“He was just in the first-team squad when I was there, he played a few games on the left wing and later developed more into a full-back and made that position his own. He’d been on loan and come back, and was definitely a talent.”

“I’ve got Matic as my sitting midfielder: he has pure strength, controls the game and can influence things. Anyone who follows the Premier League knows about his qualities.”

“Christian has had one of his best seasons for Tottenham and probably developed into a player who could play at an even bigger club. He was absolutely crucial for Denmark when they qualified – they played Ireland in the play-offs and he scored a hat-trick.

“He’s been linked with clubs like Barcelona and I think he could play at that level. He’s showed in the last year that he’s taken his game up a level. Whether he has got the desire to leave Tottenham, I have no clue about that, but he’s got the ability.”

“He and Christian Eriksen will be attacking midfielders, and we’ll leave the defensive job to Matic! James has been at Real Madrid, and he scored an unbelievable volley in the last World Cup. He has great quality and plays for an underdog team – even though when you look at their squad, Colombia are one of the sides I would like to see go very far – and could go far.”

“He’s an obvious choice, he’s definitely in an underdog team and I have to pick him. Hopefully he will be fit – both for him and for us fans, because we want to see him play at a World Cup after the season he’s had and the push he’s made to come closest to Messi and Ronaldo. I wouldn’t say he’s quite in their bracket yet, but his last season has certainly been of that quality.”

“He’s a complete centre-forward, just always in the right position in and around the box, and a great finisher. I’d like to think he'll have a great tournament, but it just depends on how the Polish team fare.

“Lewandowski’s success will depend a lot on the team because he’s a pure striker who needs the assistance from his team-mates and chances to be created for him. We’ve seen it at Borussia Dortmund and Bayern Munich; when he plays in a good team with the players around him, he provides the finishing touch to any attack.”

“Senegal are a bit of a question mark. In the past, they’ve had great success at a World Cup and they’ve always got a good team with good players. Mané has shown this year what he’s capable of, especially in the second part of the season.”

Eidur Gudjohnsen is a World Cup brand ambassador for 188BET. The firm is offeringmoneyback as cash up to £25 on losing World Cup Outright Winner bets if Brazil win the World Cup: www.188bet.co.uk/promo/brazilcashback