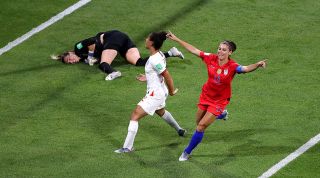 So England's 28 years of hurt will be extended to at least 32 following a game in which they were largely outclassed by a stronger and technically superior USA side.

No shame in that, although Phil Neville will see a 3rd/4th place finish as something of a failure – as he confirmed pre-match. England's semi-final side of 2019 were arguably even more spirited, skilful and tactically disciplined than the one of 2015.

But just like Laura Bassett's own goal cruelly ended Lioness hopes four years ago, Steph Houghton's late missed penalty – incredibly, England's third this tournament – ensured there will always be that sense of 'what if?'

Focus on a promising future

A few of this crop are unlikely to be in the mix for 2023 (Jill Scott, Steph Houghton and Ellen White are all in their early ‘30s) and not everyone covered themselves in glory. Millie Bright's second bookable tackle late on, for example, was almost Cameroonian in its recklessness.

But encouraging displays from the likes of Nikita Parris, Lucy Bronze and a 22-year-old Keira Walsh should give Neville hope for the Tokyo Olympics and 2021 Euros, plus the next World Cup.

From a general perspective, Tuesday night’s action-packed game – watched by what will surely be a record-breaking UK TV audience – will have further helped promote a sport which has been embraced this summer like never before.

While England looked entirely shell-shocked by the occasion in the early stages, a typically confident USA played like a team who believed that the World Cup is theirs for the taking.

Indeed, Jill Ellis's side looked ready to inflict another 13-0 defeat when Christen Press immediately justified her place in the first team with a well-taken header past another surprise starter, Carly Telford (replacing an injured Karen Bardsley). The Utah Royals striker's goal also maintained her homeland's astonishing record this World Cup of scoring before the 12th minute of every game.

Megan Rapinoe became the face of USA's World Cup campaign this week, not only with the two quarter-final goals she scored against France but also her statement of defiance against Donald Trump.

So there were echoes of Ronaldo at France '98 when the woman expected to be star of the show was left out of the starting line-up. Had Rapinoe's tireless work rate in the previous round left her unable to deal with the pace of Lucy Bronze? Had she fallen out with coach Jill Ellis?

Of course, it's more than likely that a simple knock forced Ellis's hand. But that won't stop the guessing games.

So it turns out that Alex Morgan hadn't peaked too soon. The Orlando Pride forward had failed to score in the USA's four previous games, having netted an incredible five in their opener against Thailand.

But Morgan’s 31st-minute header, a perfect way to celebrate her 30th birthday, proved to be the difference between the two teams and also installed her as firm favourite for the Golden Boot.

Of course, she still faces competition from Ellen White, whose equaliser also put her on the six-goal mark (a seventh was ruled offside by VAR), plus her US team-mate Rapinoe, who will be hoping to add to her tally of five in a final that USA will now be odds-on to win.

OPINION Project Youth 2.0: Why Arsenal's problems can be solved from within